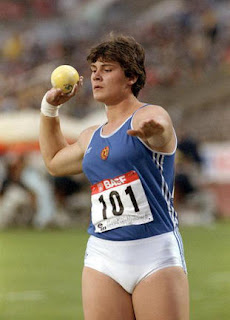 ed at the Sports School for Children in East Berlin in 1979. At age 16 the coaches started her on Anabolic Steroids, without her understanding. She quickly outgrew her clothes. By 18, she was 100 kg, had a deep voice and facial and body hair. On the streets she was subjected to homophobic taunts, and was called a drag queen in front of her mother. After that she never wore a skirt again.

In 1986 Heidi won the European shotput champion with a record 21.1m. In 1988 in training, she lifted 100 tonnes of weights in a two week period. The strain damaged her knees, hips and back, and by 1991 her career was over. For even longer, she was in denial that she owed her career to steroids rather than skill and determination.


In 1995, Heidi met a transsexual, and decided on the same change. Two years later he transitioned to Andreas. “The doping probably didn’t directly cause my transsexuality but it 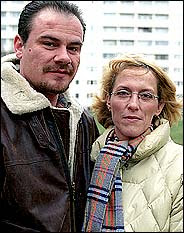 In 2000 Andreas testified against Manfred Ewald, leader of the East German sports program who was convicted of accessory to the intentional harm of athletes. The “Heidi Krieger Medal” is given annually to Germans who combat sports doping.

He met Ute Krause, an East German swimmer, at the Ewald trial, and in 2002 they married. Andreas now runs a clothing shop in Magdeburg (map). He still has physical problems from the anabolic steroid treatment.

*Not the Danish politician.