Ron Cox moved to Fort Worth, Texas, with his family when he was 11. At 20 he joined the US Navy in anticipation of the draft, and was a machinist in destroyers. While being trained to operate and maintain nuclear submarines, he met his wife. 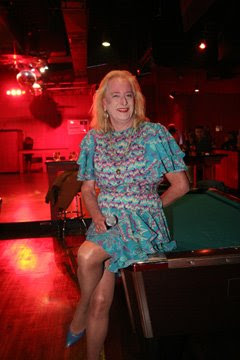 After his military service, they moved to Fort Worth and he worked in management at General Dynamics. He also earned a pilot’s license and became involved with The Confederate Air Force which preserves vintage planes. He and his wife had a son and daughter.

He did not tell her of his femme side for six years. She thought that it was just a phase, but helped him with shopping for clothes. At first he dressed only at home, but then he started doing a country-and-western drag act as Evelyn. They divorced, amicably, in 1994.

Evelyn disengaged from General Dynamics, and took a job bartending en femme. She changed her name to Rhonda Mae at a customer’s suggestion. She moved on to management and performing in various bars around the city, getting closer to living full-time as a woman.

As Aids developed she became the organizer for raising money and distributing food to Aids patients. Then she came down with Aids herself. For two years she was on AZT and not able to leave her apartment, but then refused the drug and got better. She lives on disability benefit, but still does shows and helps to raise money for Aids patients.