Raised in England by a Northern Irish family. At age 17 joined a Catholic order to prepare for the priest-hood. During the eight years of training, acquired degrees in theology and philosophy, and was ordained in 1967. Then did a B.Sc. in sociology at the London School of Economics.

Afterwards resigned from the priesthood, married a woman, and they moved to Australia. They had two daughters. Started working with Australian Aboriginals.

In 1975, she became Janine, although it took her another eight years to be accepted for surgery as she was still living with her wife and raising her daughters.

In 1976 her first book (editor and co-author), The Mapoon Books, on aboriginal culture and institutional racism was published. She works with aboriginal groups in resisting mining on their territory, and researched Granada TV’s World in Action program on the issue. In the 1980s she worked as a freelanc 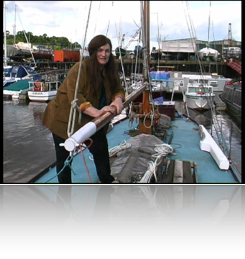 In the late 1980s she was working on a documentary on the diamond industry for Australian, US and UK television. She produced a program for BBC’s Panorama on the CIA, MI6 and KGB under Gorbachov, and The Sun outed her to attack her credibility. In 1992, when The Diamond Empire was two-thirds shot, her home was invaded and she was seriously beaten and was in hospital for two months. While she was on the critical list, the BBC took control of the project away from her. However in 1994 the program was shown on the BBC and in the US with her name on it. Pressure from the diamond monopoly, De Beers, resulted in its showing on Australian Broadcasting Company being cancelled, and in the BBC not selling it abroad, especially to South Africa.

She continued to research the diamond industry, especially in South Africa and Namibia where she was a guest of the miners’ union. This resulted in the book Glitter and Greed, 2003. 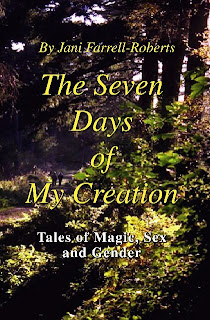 In 2002 she published The Seven days of My Creation on her own gender transition, and on the status of women through the Christian centuries. She has also published on the causes of AIDS and on problems with the polio vaccine. She was also a Wicca priestess.

Janine suffered a massive stroke in 2010, and died six years later at age 74.

What an amazing woman. I came across one of her web sites while googling for something on religion.

Nobody has done a Wikipedia page on her. She is not in any of those lists of outstanding transpersons that we find on the web.

Here is an excerpt from her documentary on the Diamond Empire.