William Tiemersma graduated from Montréal's Conservatory of Music in 1976 as an organist, after studies with Bernard Bernard Lagacé, and after winning the John Robb Memorial Organ Comeptition, 1974. Tiemersma was hired by the do 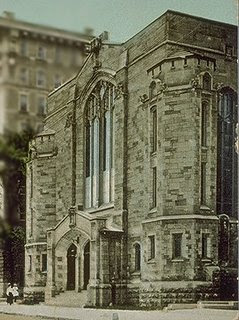 wntown Unitarian Church of the Messiah in Montréal (at rue Sherbrooke and rue Simpson -- map), performed summer concerts at St Joseph's Oratory and made a number of broadcast recordings for radio, mainly for Radio-Canada. 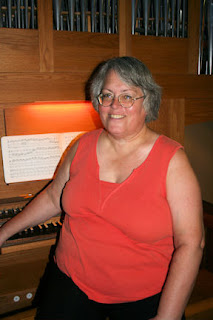 Tiemersma transitioned and became Wilhelmina in 1984: surgeon Dr Hugo Ciaburro. She had been attempting suicide as far back as 1971. In May 1987, she was suffering hormonal mood swings compounded by anti-depressants. After an argument over beers with a friend she went to the Church of the Messiah and set it alight.

She wandered the streets of Montréal for six hours and then surrendered to the police. Two firefighters died in the blaze. Wilhelmina served three years and two months in a women's prison for criminal negligence causing death. She was allowed to practice the piano while in custody.

Since her release, Wilhelmina has performed major organ recitals in Québec and Ontario, usually in churches, often with media coverage. From 1995-2005 she was organist/choir director St. Barnabas’ Anglican Church in Pierrefonds in west Montréal's West Island. Since 2007 she has been with Saint Ansgar's Lutheran Church.   She has been heard on both CBC and the BBC.

Wilhelmina is mentioned in the Canadian Encyclopedia as one of the outstanding students of Bernard Lagacé.