Revival of an old bogey-person


Those of you who pay attention to my sidebar may have noticed a surge in visits to my June 2007 article on Angela Douglas. In fact there have been 450 visits in the last week. I am not always able to find where such surges come from, but in this case I was able to find that it came from a Gender Critical Reddit thread. The first line in my article suggests that visitors also read my July 2015 History of Tao. I can see from my statistics that very few of the Reddit visitors did so.


I assume that the participants in the thread are youngish. Their older sisters would have been quite aware a long time ago of Douglas’ ‘scandalous’ letter, which was published in Sister magazine Aug-Sep 1977. That is 42 years ago. The infamous Janice Raymond published a selection from it in her The Transsexual Empire, 1979.

"Free from the chains of menstruation and child-bearing, transsexual women are obviously far superior to Gennys in many ways .... Genetic women are becoming quite obsolete, which is obvious, and the future belongs to transsexual women. We know this and perhaps some of you suspect it. All you have left is your 'ability' to bear children, and in a world which will groan to feed 6 billion by the year 2000, that's a negative asset."

Now again this is being used to justify negative emotions. One of the Reddit contibutors writes:

“These dudes are so full of rage that they will never be us. They KNOW they are just men with fetishes in bad wigs. I used to think HSTS trans weren't AGP, but I've since been disabused of that myth. This is only further proof.”

There are various adjectives that could describe Douglas’ letter: satirical, ill-advised, arrogant, foolish, counterproductive. The editors of Sisters magazine in 1977 had enough sense of humour to print it, and their readers laughed at it, and that should have been the end of it. However two years later Raymond was looking for things said or done by trans women that she could pretend to be scandalized by, and as her book is still read by anti-trans people, the tale of Douglas’ letter gets repeated again and again.

The Reddit thread suggests that one foolish person can bring an entire movement into disrepute. That game goes both ways. Here is a list of lesbian serial killers. Here is review of a book about the suffragettes pointing out that some of them went way too far, e.g. bombing unoccupied houses (unoccupied meant that only the servants were there).

In fact all non-fascist social movements contain good and bad, wise and stupid, eccentric and otherwise. This encyclopedia features all kinds. Here is a pointer to trans persons convicted of murder – to balance the lesbian serial killers link.

Douglas did good in organizing TAO in Miami. Douglas did bad in sending trans women to Dr John Brown.

All of Raymond’s books are aligned with dogmas of the Catholic Church. In addition to transgender, she is also against abortion, contraception, reproductive technologies and the decriminalization of prostitution. In the early 1980s she campaigned against medical care for trans people, and both federal and private insurance care was thus denied to those who needed it. It must be the case that some died as a result.

Women in the US and elsewhere have their rights under attack. Serious issues like the right to choose, access to contraceptives, access to medical care, misogynist murders etc. Real issues! And these women on the Reddit forum are spending their time getting worked up about a letter written 42 years ago that perhaps deserved momentary attention, but not four decades of people saying the same thing again and again.
________________ 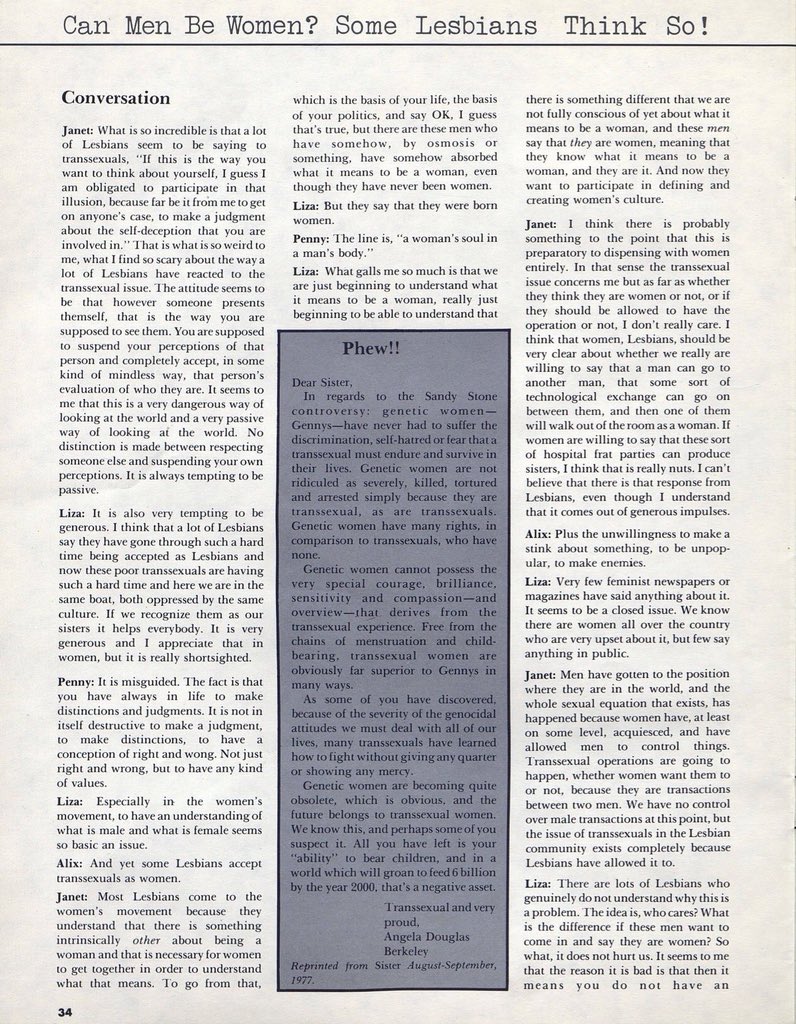 I worked with Angela Douglas as the Philadelphia Director for the TAO. I would never diminish the good she did for the fledgling trans community. But, at the same time, she had serious mental health issues. RIP Angela...