A child who had been abandoned at birth, Rex Coster was named by the couple who adopted him. He was raised in Southend-on-Sea, until 1938 when they moved to Holloway in London, an area that was heavily bombed during the Blitz.

Rex was called up to the RAF in 1942 and was able to join Ralph Reader’s RAF Gang Show. He toured North Africa, Italy and Cyprus putting on shows for the forces. His flight sergeant was Tony Hancock who would become a famous comedian in the 1950s and 1960s. Rex was usually cast as either the leading lady or as a comic vicar. After the war, as there was a popular broadcaster called Sam Costa, Rex took the name Jameson, after the whiskey, to avoid confusion. 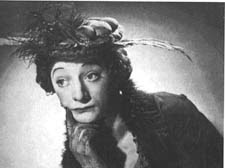 He found work in a touring company playing a cockney charlady, a character that he named Gladys Shufflewick when he appeared on BBC radio in 1950. Rex was the first dame comedian to perform in female clothing when on the wireless. He actually arrived, usually by taxi, already dressed and stayed in character. There were very few other comedians doing anything similar, and the act took off. He was usually billed simply as Mrs Shufflewick, and many in the audience were unaware of Rex Jameson, taking Mrs Shufflewick to be a woman.

He did eight seasons at the Windmill Theatre, when as Mrs Shufflewick, he would drink at the Bear and Staff in Charing Cross Road where he developed a friendship with the young Danny La Rue. Mrs Shufflewick played most variety theatres across Britain sharing the bill with most of the stars of the day. However Rex was drinking more and more, and betting on horses, and by 1960 he was bankrupt.

In 1964 Mrs Shufflewick appeared on the LP Look in at the Local recorded live at the Waterman’s Arms on the Isle of Dogs.  He also appeared in West End Shows. He also did some pantomime, and a season at Butlins Holiday Camp where he had to constrain the natural bawdiness of his act for the family audience. However he then started working the northern working men clubs where the bawdiness was encouraged. He lived in a run-down flat in Kentish Town where he kept scrap metal in the bath, and was proud of the fact that he had not had a bath in over 25 years.

In 1968 he was mentioned in the first edition of Roger Baker’s history of drag. In 1969 Mrs S was the star of an ‘adult pantomime’ in Brighton called Sinderella, but the police closed it after two nights because of complaints about the material. Also in 1969, Rex met David, a labourer in his 30s who would stay with him until his death. They shared a fondness for drink and gambling. By the early 1970s, Mrs S was mainly performing in gay pubs, especially the Black Cap in Camden and the Vauxhall Tavern in Lambeth. She recorded an LP live at the Black Cap which sold well, but within a few months there were performers who were doing her full act under their own names.   Listen to the entire album here. 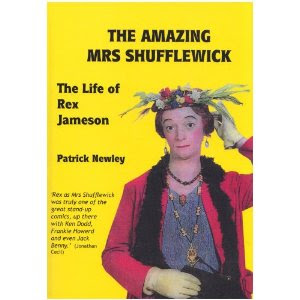 Patrick Newley (1955 – 2009) became her manager in 1972, and managed to get her back into the West End as a support act to Dorothy Squires. Newley also managed Douglas Byng, and introduced the two of them.

Shuff, as both the actor and the character became known, became a fixture of the thriving gay scene of the 1970s. He gave an interview to Gay News in 1973, and was now open about his own sexuality. He did not seem to understand what the Gay Liberation Front was about, but twice Shuff was on a prominent float in the Gay Pride march. He was also a celebrity judge at Andrew Logan’s Alternate Miss World.

He played cameos in the Marty Feldman film, Every Home Should Have One, 1970, and Tony Palmer’s television documentary about music, All You Need Is Love, 1977.

Not Southend nor Holloway nor Kentish Town list either persona of Shuff among their notable residents on Wikipedia.

Rex’s preferred term for what he did was Dame Comedian.  Not female impersonator or drag performer.

Rex’s affectionate term for his lover, David, was ‘Myra’.  Nothing to do with any character created by Gore Vidal, the cultural reference was to Myra Hindley (1942 – 2002) the Moors Murderer who finally died in prison.