In 1934, 60,000 persons, 50,000 of them descendants of slaves, lived in the Bahamas. Most of the whites lived in Nassau, the capital, and rarely went to the other 700 islands of the archipelago. In the previous few years a series of hurricanes had wraught damage; the rum industry had collapsed since the ending of US alcohol prohibition; the sponge trade was in decline because of overfishing.

One of the first things that Joe did on Whale Cay was to hire seven men to lay a road across the island. Dressed in khaki he laboured alongside them. One day, at lunch, he managed to throw a knife and kill a snake, and then after that he was 'The Boss'.

Buildings went up and a store was opened. Joe paid men 16 shillings a week and women 12 shillings. Joe could curse but no-one else was allowed to. Three hundred men laboured on the great house which was finished in 1936.

They cleared the coconut groves and planted 3,000 palm trees. Fruit and vegetables were planted where suitable. Women are assigned to weeding: weedresses. Joe did not approve of women labourers:


"If there weren't so many lazy men, women wouldn't have to go to work".

The lighthouse was rebuilt, and for the first time an electric beacon installed; a power plant was built, a radio station, a schoolhouse and a museum. Fish were canned or kippered, fertiliser extracted, pigs and chickens reared. Joe bought more islands: Bird Cay, Cat Cay, Devil's Cay, half of Hoffman's Cay, and established plantations of cantaloupes, potatoes, celery, strawberries, asparagus, bananas, carrots, rice and peanuts. A harbour was dredged and more boats were built.

Ruth Baldwin refused to live on Whale Cay as it was too primitive, and Joe bought her a second home near Miami. Joe had a new lover, Addison, also a masculine woman, who 'doped awfully'. 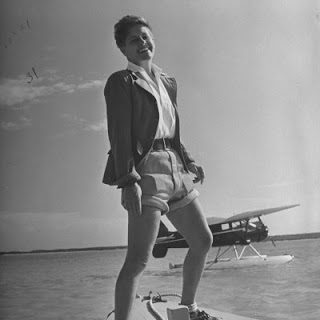 A guest on the island was Hugh Brooke, novelist, who wrote Saturday Island (filmed 1951) while living there. Together Joe and Hugh devised elaborate games for the guests. Joe would, as a prank, do drag as female icons such Salome or Cleopatra.

Friends and acquaintances from England came. They had a beach for every wind. The black employees were expected to keep to their own beach. Joe attempted to ban obeah on the island, but as he was seen with Wadley at his side, wherever he went, he was taken to be a practitioner.

In 1936 Joe's racing trophies were stolen from the house in Chelsea, where Ruth Baldwin still mainly lived. Ruth died a year later, of a suspected drug overdose.

That was the year that Joe parked his yacht on the French Riviera and first met and loved Marlene Dietrich.

In December 1937 a US yacht ran aground. The New York Times reported a 'girl garbed in men's clothing' who guided the US Coast Guard.

In 1938 Joe and Marlene rekindled their affair when Joe helped Marlene to buy a yacht. One night on the Riviera, invited to a formal dinner with Dietrich and soprano Grace Moore, Joe arrived inevitably in a tuxedo. The two women insisted that he change into a dress. Joe complied, but when they saw him so, they agreed that a tuxedo was the right way to dress.

The Bishop of Nassau came to dedicate the church on Whale Cay. Joe arranged for pistol shots to be fired outside his window at 1am, and was impressed that he never said anything about it.

Joe loved to dress up as a woman for parties in frumpy dresses and excessive makeup. He also liked to dress up as a doctor and play the part. But he also did set up a hospital on the island, and captained a ship round the Windward Islands so that the Red Cross could reach those who needed treatment.

Joe administered rough justice to the islanders. In particular, despite his own promiscuity, Joe disapproved of adultery, and those who were found out were usually banished from the island. In one case, in 1939 a man was horse-whipped and complained to the British government, who ruled that whoever owned an island in a dominion was effectively judge and jury. Joe insisted that all the islanders attend church each Sunday, and that they contribute into a health-care fund. He paid for and arranged the funeral of anyone who died on the island. New-born children were taken to Joe to be named. For several of the girls he gave the names Marion and Barbara that he had spurned for himself.

All the servants in Joe's house were men: "I like men. Most of my friends are ordinary men. I've never been frightfully fond of pansies, but manly men." The one pansy she did like being Reverend Julian Henshaw (1904-1951), the vicar of the island church, who was almost as outrageous as Joe, and had a fondness for young men.

Joe gave Marlene ownership of one of the beaches on Whale Cay. However their friendship went sour, partly because of Joe's French secretary who was hired as a companion for Dietrich's daughter and later dismissed, and a dispute over a gem-encrusted bracelet.

In December 1939 Joe gave a banquet for 1200 people in Nassau, the capital of the Bahamas, his first public appearance.

In 1940 the US author, Damon Runyon, wrote in his newspaper column about how a friend of his had landed his amphibious plane at Whale Cay:


"a short, stock-built dame came popping out of a house on the cay with a double-barrelled shotgun in her dukes and dull menace in her lovely orbs".

Edward Windsor, who had been King of the British Empire in 1936, before abdicating to marry a US divorcee, was open in his admiration of Nazi Germany. To get him out of the way, he was appointed Governor of the Bahamas in 1940 for the duration of the war. In January 1941, the Windsors made a formal visit to Whale Cay, which was featured in Life magazine, but again referring to Joe using the disliked name 'Betty'.

Dolly Wilde died 1941. After Ruth's death in 1937, Joe had started writing poetry. In 1940 and 1941, these and other poems were privately printed under the name of Hans Jacob Bernstein, a supposed Czechoslovakian refugee.

In August 1942 the US ship Potlatch was torpedoed, and Carstairs took one of his boats and rescued 47 sailors.

Gwen Farrar died in 1944, as did Mabs Jenkins who had done the world tour with Joe.
That year Joe took up flying. To obtain the licence he needed to supply his birth certificate, and finally discovered his mother's real name.

Erich Remarque, who had been with Marlene Dietrich when she met Joe, put him in his 1945 novel, Arch of Triumph, as a yachting captain, and of course as a man. (It was filmed 1948, and again 1985 but without the yachting captain character)

By 1945 Joe had finally finished paying off his British back taxes. He then applied for US Citizenship, and spent three years attempting to get permission to build a small-craft airport outside Miami.

Serge Voronoff died aged 85 in 1951, as did the Reverend Julian Henshaw who after a trip to Rome, returned with an advanced case of syphilis.

Joe started having aches and pains in his legs from the late 1950s. By the 1960s Joe found the islanders to be less subservient. Increasingly he was living in a houseboat in Miami. There is no record of any interaction of Joe with TAO which was active in Miami Beach at that time.

In 1975 he sold Whale Cay for just under $1 million. He bought a house in Miami and moved all the furniture from the house on Whale Cay. He also set up a display of photographs of all his girlfriends, 120 by this time. He spent the summers in Long Island.

By 1978 he had met a younger man, Hugh Harrison, aged about 60, and invited him to share his home, in Miami, and then in Naples, Florida. They had a cook and a maid, and as Joe's health failed, a series of nurses. Joe refused to take any medicines at all.

His favourite jacket was an English blazer, with a crest, that had been bought in the 1920s. Dietrich played a Miami concert, and Joe sought an audience, and they sort of had a reconciliation.

Bardie Coleclough had left her husband after the War, and, while living on an income from Joe, became a communist, a CND activist, a vegetarian and a Rolls-Royce enthusiast. She died, aged 89 in 1986.

Obviously Joe was not a feminist who advocated equal job opportunities and wages.

While sexually interested in women, and proud of his 120 conquests, he quickly tired of most of his lovers, and expressed a preference for male company.      Homosocial heterosexuality was very common among men of his generation.   Added to this was his assumption that he was more of a man in that he was not gay!

Joe did some good things for the inhabitants of his islands, but alwys things that he decided, and he imposed rules upon them that he did not conform to himself.

He was sufficiently comfortable in his masculinity that he was able to do reverse drag.

Apart from a few pioneers who happened to have the right connections or be in the right place at the right time, transgender surgery was not feasible, and less so for ftm until the 1960s at the earliest.   By then Joe was an old man suffering from arthritis.   In addition it was very much of his nature to refuse all and every medicine.   So he would not take male hormones.    Unlike Violette Morris he was naturally small-breasted and so did not need any top surgery.

Obviously Julian Henshaw did not catch syphilis in Rome as it takes some years to get to the tertiary stage.

Joe was frequently read.  After all he had been a famous speedboat competitor, and rumours sped about the lord of Whale Cay.

The February 1941 issue of Life, which featured Joe and the Windsors, also contained Henry Luce's essay, "The American Century".