Tommy Vasu was the first known lesbian to legally own a bar in San Francisco, possibly using the money she made managing the sex work of a number of her girlfriends. 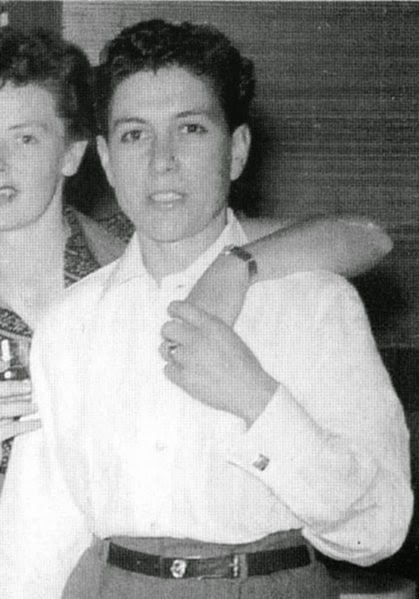 She ran Tommy's Joint at 299 Broadway from 1948 to 1951. Tommy usually dressed in men's double-breasted suits, ties and a fedora hat. She kept her hair short and went with hookers. She also ran the parking lot across the street, ran around with gangsters and drove a Cadillac convertible. Prostitutes and lesbians, artists, bohemians and queers mixed in the bar. In June 1949 the police raided and eight women were charged with vagrancy.

Later she ran Tommy's Place at 529 Broadway from 1952 to 1954, across from the then new City Lights Bookstore. In 1954 the bar was closed by the vice Squad. Two of the bartenders were charged with serving minors, and then some heroin, probably planted, was found in the ladies' toilets. Tommy lost her license and one of the bartenders was convicted.

She still ran the parking concession. In the late 1960s she had a expensive blond girlfriend who was on heroin. And Tommy became a dealer to supply her needs. She was busted in 1969 and served five years in the California Correctional Institution at Tehachapi.

She was murdered shortly afterward.