After graduating from Hunan Mass Media Vocational Technical College, Liu performed as a professional pole dancer and with a boa constrictor for three years, saving madly for surgery.

Afterwards Shi Han moved to Beijing and obtained modelling gigs for magazine, websites and online games. In late 2010 Shi Han confirmed, on her blog, that she had had transgender surgery.


我确实做过变性手术。我只想隐姓埋名做一个普通人。可匿名者就是不肯放过我。要公开我的隐私曝光我不能生BB的事实在媒体大众面前。现在，我承认了。不用逼我，我会自己慢慢说出真相。与其让别人一而再中伤我，不如自己坦诚面对一切。(“I did have transsexual surgery. I just wanted to hide my identity and be an ordinary individual. But an anonymous person just wouldn’t let me go, making my privacy public and exposing to the media and public the fact that I can’t give birth to babies. Now, I admit it. No need to push me. I will slowly reveal the truth. I’d rather honestly face all this than allowing others to slander me.)” 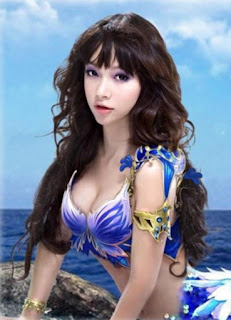 documentaries made about her. While before her confirmatory posting she had been bothered by text messages from rich men and directors, asking her to be the man's mistress, such messages quickly stopped.