The NO.WIKIPEDIA (Norwegian) page on Harry Benjamin gives his published works as:

The second item, Better sight without glasses, has also been claimed by Gallus Mag.  Andrea James, gave the same bibliography, but has now removed it:

I have already explained that there was another Harry Benjamin, a British naturopath and Gurdjieffian.

The sexologist Harry Benjamin (1885-1986) wrote four and only four books:
The first and third books are almost impossible to find, as difficult to find as the books by Angela Douglas. However the second is easily available on the second-hand market.

For some reason both Andrea James and NO.WIKIPEDIA did not mention any of Benjamin’s actual books other than the 1966 one.

Let us have a look at the second book, Prostitution and morality, by Harry Benjamin & Robert E.L. Masters. 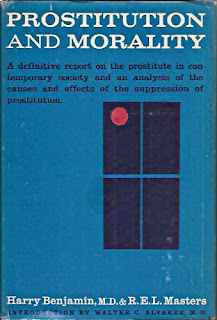 It is not usually mentioned that Benjamin had an ongoing interest in prostitution. However as the back flap says:

Harry Benjamin, M.D., sexologist, endocrinologist, and geriatrician has been for decades an internationally recognized authority on sexual problems. His first article dealing with prostitution appeared more than 30 years ago [ie in the 1930s]. Since that time he has published many additional articles on the subject. His thinking about prostitution has been enriched by personal discussions of the problem with such men as Havelock Ellis, Magnus Hirschfeld, and Alfred Kinsey; and by a correspondence with René Guyon.


The second author Robert E L Masters (not to be confused with William Masters who investigated sexual responses) wrote a number of books on sex and the mind (Amazon).

The back flap concludes: “Another Benjamin-Masters collaboration, on the subject of transsexualism and ‘change of sex,’ is presently in progress". As we know it did not come out as a collaboration. 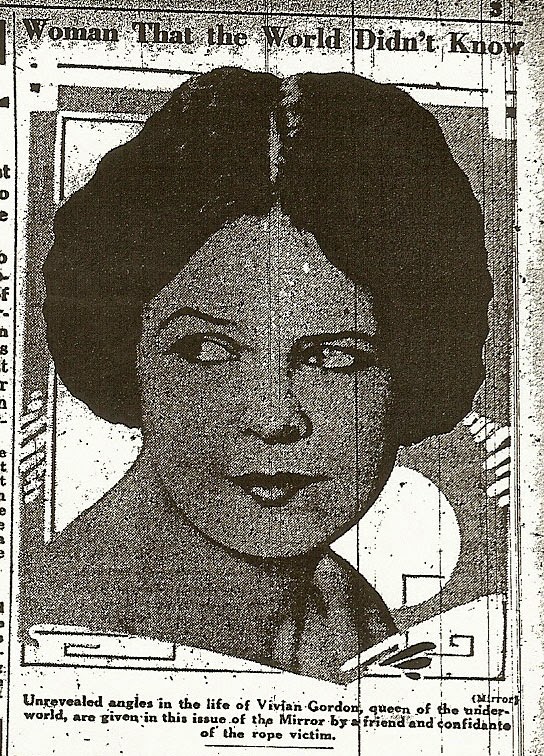 In his Preface, Benjamin explains that he was incensed by the February 1931 murder of New York prostitute Vivian Gordon, whose murderer was never convicted. This started his involvement with and his being an advocate for the decriminalization of prostitution.

Some prostitutes are, of course, trans women. This comes up three times in the book.

In chapter 5: Varieties of Prostitution and Prostitutes, includes a section "A new kind of prostitute". Benjamin explains that he has had "extensive first-hand clinical experience with such cases for many years, and employed the term 'Transsexualism' now widely used". He explains the basics, and that "many of the products of sex conversion emerge as extremely attractive 'females' " [note the quotations marks]. He cites Coccinelle, April Ashley and Hedy Jo Star as examples who were attractive. Of his 108 mtf cases at that date, 15 were earning their living as prostitutes, and another 15 were doing it part-time. Benjamin thinks that reassurance that one is actually a female is sought in coitus, and that once this reassurance is acquired, she may settle down to a more normal existence. An even better proof of femininity is being married, "and this factor tends to limit the duration of period of harlotry". He also considers non-operated transsexuals who are saving for the operation. These "will not allow coitus". (page 165-8)

Chapter 10: Homosexual Prostitution, quickly mentions transvestite prostitutes in the Middle and Far East, and cites Kraft-Ebing on urnings who use female coquetry. "The imitation of feminine peculiarities is spontaneous and unconscious in congenital and in some acquired cases of antipathic sexual instinct". (page 288)

Later in the same chapter there is a section "Female impersonators". Benjamin notes that transsexual prostitutes are very considerably outnumbered by homosexual transvestite prostitutes, some of whom work in nightclubs as female impersonators where they make contacts with the patrons of the club. He estimates that 10% of the impersonators were transsexuals, 30% bi- or heterosexual, and 60% homosexual. He also regards the customers of trans prostitutes as homosexual or bisexual – "some are probably latent homosexuals who are able more or less to pretend that the impersonator is genuinely female". Benjamin makes a contrast: "There is a large psychological gulf separating the homosexual transvestite from the transsexual – a gulf utterly ignored by some 'scientific' writers on the subject … and members of the two groups often share an intense dislike for one another'. (page 305-9)

One of Benjamin's patients was Patricia Morgan who started as a male prostitute, became a transvestite prostitute, had surgery from Elmer Belt in 1961, and continued as a female prostitute. Perhaps Benjamin should have listened more attentively to what Morgan had to say. In her very being she refutes his simple distinction between the homosexual transvestite and the transsexual.

Male homosexuals are attracted by masculine persons and masculinity. Recent studies have shown that men attracted to trans women are a type of heterosexual man. Benjamin, despite his insight elsewhere, fails to comprehend this.

There is no mention of trans men (ftm) prostitutes. They do exist.

Benjamin seems to be too focused on attractive trans women. Many trans women are not attractive enough to work in nightclubs and/or do not pass. Many of these are unable to obtain other kinds of work, and are compelled to turn to prostitution to survive. They may also be compelled by the state refusing to re-issue personal documents which are required when obtaining work. There is no mention of this.