John Huminik, Jr was born and raised in Washington, DC by immigrants from the Soviet Union. He married, at 20, the only woman he ever dated, and they had four children.

He was, at 23, vice-president of an engineering firm and working on high temperature coatings for rockets, a subject on which he later published a book.

He was also a second lieutenant in the Army Reserves for twelve years: he received a commission in the Chemical Corps Reserve and commanded the 312th Chemical Company and the 419th Chemical Biological and Radiological Center. In 1960 he was approached by Soviet agents at a scientific conference. The FBI asked him to play along, and for six years he delivered selected documents.

In 1963 Huminik became president of Chemprox. He served as chairman of the Washington chapter of the American Society for Metals (1965-66) and of the American Welding Society ( 1961-62) , was awarded the Welding Society's meritorious certificate in 1963, and was listed in Who's Who in Commerce and Industry (13th edition).

In 1965 he was involved in the US support of a right-wing coup in the Dominican Republic. In 1966 he was outed as an FBI asset, in the events leading to the expulsion of Valentin Revin, the Soviet embassy's third secretary and science officer. Huminik gave evidence to the Committee on Un-American Activities and published an autobiography of his years as a spy.

His wife had by now become aware of his cross-dressing, but he didn't go beyond dressing in private.

In the early 1970s Huminik was president of General Industrial Corp. and General Enterprises Corp. which in December 1975 were sued by the Security and Exchange Commission (SEC) for alleged defrauding of investors. Huminik agreed, without admitting or denying the SEC's allegations, to a permanent injunction barring him from making untrue statements, and otherwise defrauding investors, in the future.

However once the espionage phase was over the inner feeling of being female became more insistent. He was diagnosed as having 'gender reversal', and the Huminiks divorced in 1975, and as Eleanor Schuler she had surgery the next year with Dr Roberto Granato, and took a job as a medical secretary. 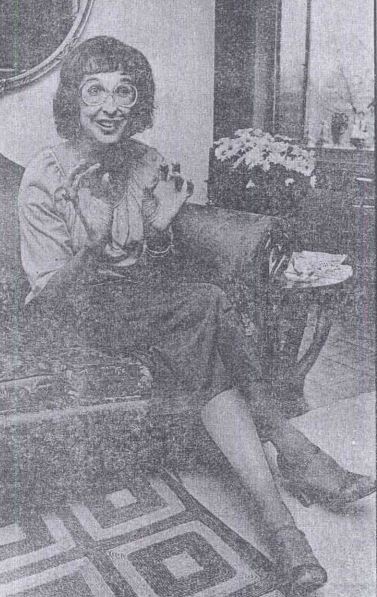 She wrote a second autobiography and a general book on sex-change surgery (she contended then that gender reversal occurs in the fetus, but in 1996 would contend that the reason was that her mother had taken fertility drugs), but they were never published.

By 1989 Schuler was chairman of Printron based in Albuquerque which was pioneering a pollution-free process for manufacturing printed circuit boards. She brought together scientists and engineers, and apparently raised over $7 million to float the company. Several patents were filed, one of which included Schuler's name.

In 1991 the SEC filed suit in that Schuler had been brought into the company by Karl Huber, a convicted felon and disbarred lawyer. Without admitting or denying the allegations, Schuler and Printron settled the charges by agreeing to a consent decree barring them from future securities law violations.

In 1992 Printron was chosen as one of 23 new companies on its Emerging Company Marketplace (ECM) most of which would subsequently fail. One of the companies that was to make a flame retardant was run by a convicted arsonist. The blue-ribbon panel that chose the 23 companies knew about the 1991 filing but not the 1975 one. The central registry of the National Association of Securities Dealers listed John Huminik and Eleanor Schuler as two separate people.

Printron's share price declined from $14 to 22¢. Business Week published a story in September 1994 focused on the inadequate vetting by SEC. One investor who had lost $217,000 sued claiming that the company was a fraud with himself as the target. The company was forced into bankruptcy.

Schuler sued Business Week for libel and invasion of medical privacy, and maintained that the story caused Printron to go bankrupt. However the court granted Business Week's motion to dismiss on all counts, pointing out that Schuler had, in 1975, given interviews to The Washington Post and to People Magazine. It held that the references to her being transsexual were neither false nor defamatory:


"If, however, the Business Week story could have been fairly read as implying that Schuler changed her sex to escape recognition as the person the business world knew as Mr. Huminik, she arguably would have had a plausible false light action. It is one thing to point out that a sex change can have career advantages but something else to imply that a sex change was prompted by an unethical and perhaps pathological desire to gain those advantages."

I suppose that after the events of recent years that few of us are surprised that the SEC’s punishment for defrauding investors is to get the accused to promise not to do it again.

The Business Week story is not intrinsically a transsexual story.  A name change for any other reason: family, marriage, religion would have produced the same lack of a match in the central registry of the National Association of Securities Dealers.