Nzinga was the favourite daughter of her father Kiluanji, the ngola (chief or king) of the Ndongo. When her brother Mbande deposed their father, he also had Nzinga's child murdered, and she fled. 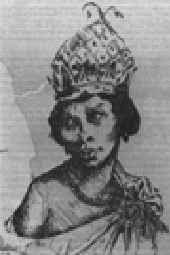 In the 1620s as the Portuguese were expanding their slaving expeditions to the area, taking out ten thousand slaves a year, and the Ndonga were negotiating for their independence and to be a supplier rather than a victim tribe. In 1621 Mbande asked his sister to return and to negotiate with the invading Portuguese, represented by João Correia de Sousa. This she did, dramatically emphasizing her equality with de Sousa by sitting on one of her minions as de Sousa took the only chair.  She was also baptized as a Catholic taking the alternate name of Ana de Souza.

However the Portuguese kept none of their promises, and Mbande either committed suicide or was poisoned by Nzinga. Nzinga became regent, but had Kaza, Mbande's son killed for impudence, and then herself reigned as ngola wearing male clothing. She renounced her Catholicism and formed an alliance with Kasanje against the Portuguese, and conquered the Jagas who were further inland.

In a book published in 1670, a Dutch sea captain by the name of Fuller describes Nzinga:


'In man's apparel ... hanging about her the skins of beasts, before and behind, with a Sword about her neck, an Axe at her girdle, and a Bow and Arrows in her hand, leaping to the custom, now here, now there, as nimbly as the most active among her attendants, all the while striking her Engema, that is, two Iron Bells'.

Nzinga was by then in her 60s. Captain Fuller was the captain of her bodyguard in the late 1640s - he is describing her preparations for ritual human sacrifice.
She kept a pool of fifty or sixty young men, instead of husbands, who were in turn allowed as many wives as they pleased. She had a smaller select group of young men whom she dressed in women's clothes. This emphasized the claim that she had been transformed by her male clothing.

Captain Fuller, after mentioning her ritual sacrifices and cannibalism, goes on to describe her as


'a cunning and prudent Virago, so much addicted to arms that she hardly uses other exercises; and withal so generously valiant that she never hurt a Portuguese after quarter given, and commanded all her slaves and soldiers alike'.

The Ndongo retreated inland as before, but the Portuguese held Nzinga's sister and Nzinga agreed to deal with them, and to return to Catholicism. In 1659 she signed a new treaty with the Portuguese.

She died at age 80, a remarkable age for the time.

After her death the Portuguese were able to seize control, and restore the shipping of slaves to Brazil.

Nzinga is honoured as a hero in modern Angola.
EN.WIKIPEDIA PT.WIKIPEDIA
Time: 12:15