"Then, on my seventh birthday, I'd been so excited about the Barbie doll I'd asked for - but instead I'd got a teddy bear wearing an army uniform.  I'd look at my parents, confused. ‘You're a boy now called Darren,' my dad Derrick, 53, had sighed. ‘You have to start behaving like one.' Talk about a shock!"

He was jailed for burglary several times from age 18, and once worked in a slaughterhouse. He had a son with his first wife, and then met his second wife in 2002 after release from prison. He was on incapacity benefit for depression. He spent most of his time on that motorbike that she bought for him and was into motocross racing. They had a son and a daughter.


" I was doing everything I could to become the man my parents wanted me to be. With my short black hair and skull-and-crossbones tattoos, I looked as tough as you could get. I acted tough, too - a real hard man in prison."

The next year Goode told the prison psychiatrist that he was intersex and wanted to become a woman. After his wife's divorce in 2011 Goode was moved to an open prison. and was now addressed as Jasmine. Jasmine was allowed to visit a consultant in London's Harley Street, accompanied by a female prison officer, and on home leave had stayed at Stephanie Booth's transvestite hotel in Colwyn Bay, North Wales.

She applied to the NHS for gender re-assignment, given permission to wear a skirt after 5pm, electrolysis and hormones. Jasmine was released from jail in 2012 and found work with a charity that helps transsexuals. 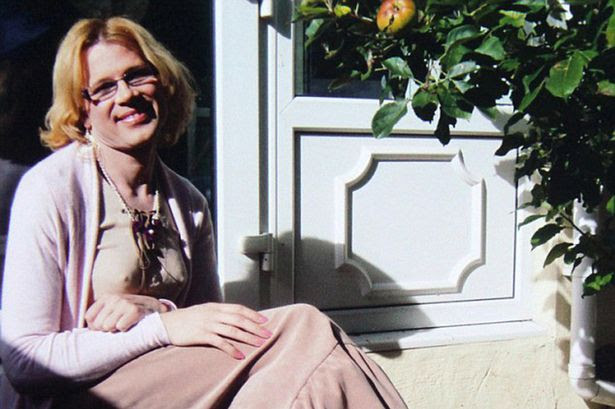 Jasmine appeared on BBC3's Unsafe Sex in the City visiting the Manchester Centre for Sexual Health and claimed to have had more than 60 sex partners since release. This was a few days before her surgery. In September 2013 she appeared on the ITV breakfast program, This Morning.