Original September 2010; revised September 2013.  My original version was based simply on a reading of Gayle's autobiography.   Since then more information has emerged, particularly in the Chicago Whispers book and on Queer Music Heritage. 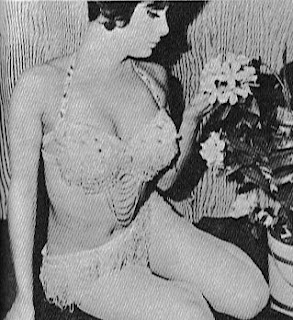 Gary Paradis, from Ohio, was raised by an aunt after both parents died in a car crash. At age 16, Gary went to live with relatives in New York, and based on appearance alone was able to get a job, using the name Gayle Sherman, in the chorus line at the Jewel Box Revue.

Later she worked at the 82 Club and then at a small club in Toledo featuring 4 strippers and 2 female impersonators, but the club did not say which was which. A customer fell in love with Gayle, and then killed himself in a car accident when he finally realized that that she was one of the female impersonators.

Gayle moved to Chicago and became a star at the Nite Life, Chicago's longest-running drag bar (early 1940s – 1981). She was mentored by Tony Midnite. Nightlife magazine ran with a cover photograph of Gayle in July 1963 advertising the show at the Nite Life with Vicki Marlane. She was said to be a twin for Sophia Loren.


In 1963 the National Insider ran a 4-part series on her life that was reprinted as a Novel paperback the next year.

Gayle replaced Tony at the Blue Dahlia, a straight club. She was able to charge $100 just to 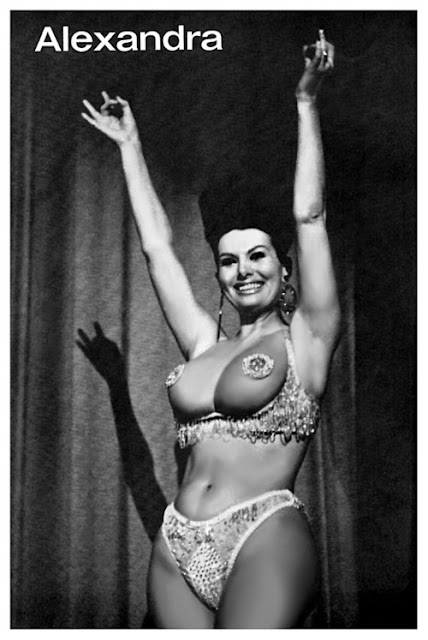 accompany business men on dates and no more. On her own time she dated women. She was working off the books and therefore could not have a bank account. She always paid cash, even when on one occasion she bought $2,400 of furniture.

She retired from performing at age 48.

She became a cosmetologist.

*Not Gayle Sherman the 1990s stuntwoman, nor the harpist, nor the wife of Pastor Paul Sherman.

Not the Brandy Alexander of New York, also a drag performer, and mentioned on p157-8 of Randy Shilts' And the Band Played On. 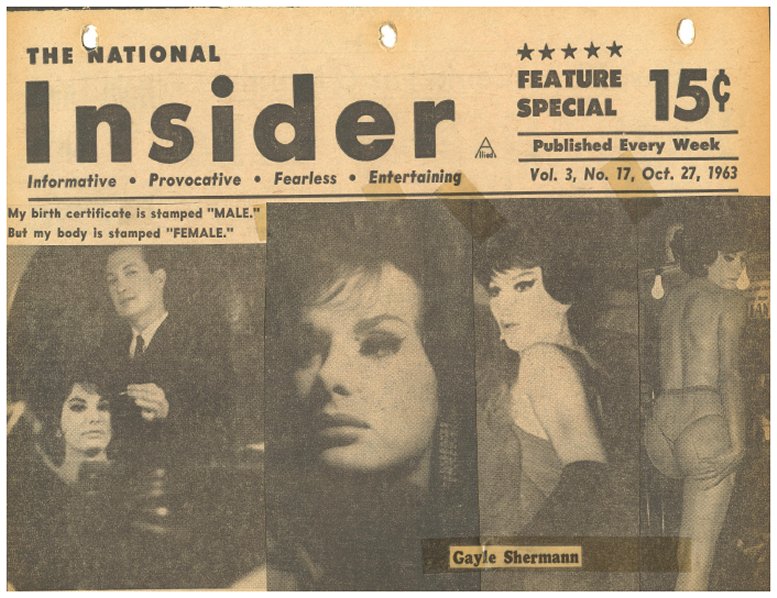 Gayle’s autobiography is only 36 pages long.  She was not even 20 when she wrote it.  The book also contains a similarly short account by a British trans man, and an essay ‘As the Experts See It’, by the then ubiquitous hack writer Carlson Wade, which will strike modern readers as particularly badly informed.  The next year, 1965, Novel Books put out a similar collection, I Was Male: two autobiographical accounts by trans women, one in regret, and an ‘expert’ essay by Carlson Wade and George Griffith.
I obtained I Want to be a Woman through interlibrary loan.  The copy is stamped IFGE on the title page and the side, although it is now owned by a university library.

:184) mentions Gayle merely to quote her as an example of transsexual separation: ‘I wasn’t then and I’m not now a transvestite. I don’t get sexual pleasure out of dressing as a woman.’   This has been repeated (e.g. Robert Hill, ‘As a man I exist; as a woman I live’: 141).  Whatever Gayle’s opinions may have been later in life, it is a bit much for academics to build generalizations on casual comments by persons hardly out of teenage.

Not to question Gayle’s narrative, but the tale of a parviscient punter at a drag revue who falls in love with a drag performer and comes to a bad end is an old tale.  The classic telling is Honoré de Balzac’s Sarrasine, 1830.  This of course was over-analyzed to death by Roland Barth in S/Z, 1970.