Luís Fernando was quite gay and liked to dress as female. He had natural advantages in passing being small, narrow-waisted and small-footed. He appeared in professional stage shows as a girl dancer.  Both he and his mother had an affair with the Portuguese nobleman, António de Vasconcellos.  When de Vasconcellos was seriously ill, both mother and son took care of him.

In 1914 The New York Times announced Luís Fernando’s marriage to a young British woman, but the newspaper was in error. In March 1924 Luís Fernando was expelled from France on the pretext of selling illegal drugs, but probably because of his homosexual activities. His cousin the King stripped him of his status of Infante, and exiled him from Spain. He moved to Lisbon. 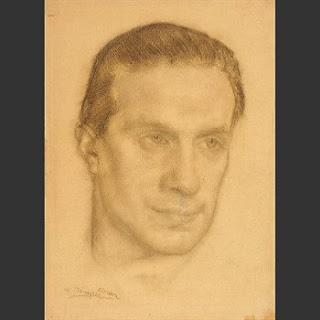 In 1926 he was arrested, en femme, in a village in the Algarve, on the Portuguese/ Spanish border, and accused of smuggling.

In 1929 the press announced that he was engaged to a friend of many years, the US actress, Mabelle Gilman, (1880 – 194?).  She was eight years his senior, now retired and living in the Chateau de Vilgénis outside Paris, and rich after her 1923 divorce from William Corey (1866 – 1934) the steel magnate. Gilman converted to Catholicism in preparation for the marriage, but Luís Fernando was still unable to enter France, and his demands for money were becoming excessive.

In 1930, when he was 41, he did marry the 72-year-old Princess Marie Constance Charlotte Say, widow of Prince Henri Amédée de Broglie who had inherited a sugar fortune, despite a lawsuit from her nephew to prevent the marriage.  However the court ruled that a nephew has no such power over an aunt.  Marie owned the magnificent Chateau de Chaumont-sur Loire.  Luís Fernando managed to squander his wife’s fortune in only a few years, and she was forced to sell the Chateau.

In 1935, Luís Fernando was again expelled from France after being arrested in a vice squad raid.

Mabelle Gilman was interned by the Germans in 1940, but released in 1942 with all other female prisoners over 60.

William Corey was still alive in 1929, so would his divorced ex-wife be able to have a Catholic marriage, even after converting?

Cousin Alfonso, the King, was not the luckiest of monarchs.  He lost the last Spanish colonies: Philippinnes, Puerto Rico and Cuba, he lost his throne in 1931, he backed Franco's fascists in the Civil War, but they did not back him in turn, preferring the Carlist pretender. However he is the grandfather of the current king.