Berthe Mrazek was born in Brussels of a Bohemian father and a Belgian mother. As a child Berthe exhibited psychic powers and dominated her parents.

At 13 she joined the circus of Van Been Frères as a lion tamer, and as a contortionist. She never had any problems with the lion, Brutus, which later killed a male tamer. She also sang at cafés-chantants, the Chat Noir and the Minerva in the rue Haut. In 1913 she gave birth to a daughter, Irène. 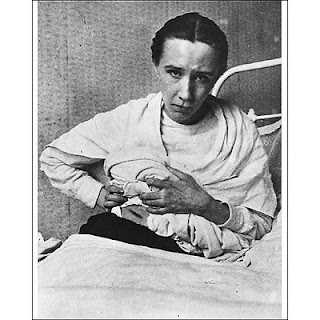 In the Great War she was a nurse for political prisoners held by the Germans at St Gilles Prison in Brussels. She escaped from the Germans and arrived at the Belgian headquarters in male attire. As Georges Masasco he performed several useful mission for the allies in the closing months of the war. Afterwards Georges became well-known and popular at dancing resorts and night cafés, where he was immaculately attired, usually in a dinner jacket. He had many lady friends.

In 1920 he fell sick, wasted away, became paralysed and blind. He became religious and expressed a desire to go on a pilgrimage to Lourdes. He could not afford this and was advised to pray at the statue of the black virgin at the nearby shrine of Notre Dame de Hal.  Georges was driven there and carried in, and on arrival, almost immediately, he arose and declared himself cured. He was able to walk and could see. And on his hands, feet and chest were the stigmata of the wounds of Christ. A French Abbé became for a time his director.

The Catholic Church investigated and accepted the miracle as fact, but forbade the administration of Sacraments to Georges until he stopped pretending to be a man, and the French Abbé was instructed to withdraw. Georges refused to stop. He declared that he was a man, and also an apostle sent by Christ to to heal the sick. He exhibited his stigmata, withdrew to a chapel of his own, soon had a large following, including many rich society women.

I can find no mention of what happened to Georges Marasco after the age of 34.

Montague Summers declares, having read the Belgian newspaper accounts, that the Stigmata are genuine, but that Georges, lacking humility, has been ensnared by ‘the fiend’ into spiritual pride.  Given that he had been a circus performer, it may have been a good idea to get a professional magician to investigate, as has now become standard procedure for all psychic phenomenon. 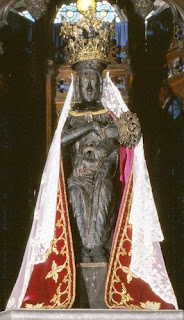 Hal (15 km SW of Brussels) is the major Marian shrine in Belgium.  Why is the statue black?  There are of course many black Madonnas across Europe.  In this case the following tale is told:


“In 1580 the deciding battle took place. An overwhelming Protestant army laid siege to the town, bombarding it with canon balls. But, legend says, the Queen of Heaven appeared on the city walls and intercepted the fiery balls in her lap. The gunpowder turned her black. The grateful population brought hundreds of canon balls that had landed inside the city walls to Our Lady, piling them under her bell tower. 32 of those are still kept in the church.”

Email ThisBlogThis!Share to TwitterShare to FacebookShare to Pinterest
Labels: Catholic, circus, News of the World, Religious