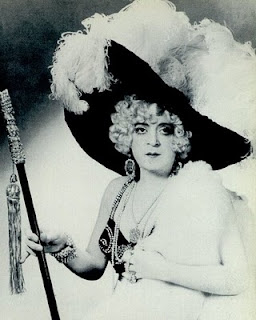 Antonio Auriemma was born in Naples, and was raised in Providence, Rhode Island. In the early days of his career, he worked in Vaudeville as Francis Renault. He got his break replacing Julian Eltinge in a touring version of his Broadway show.

++In 1913 he performed in Atlanta and contested local ordinance banning cross-dressing, to the consternation of the local police.

He made his reputation impersonating the famous actress Lillian Russell, and like her he wore expensive gowns. Renault’s show became famous for his costumes, and each Friday afternoon they would be displayed for ladies to come and see. He also had a great falsetto voice.

In 1924, after a European tour, he opened his own club in Atlantic City, New Jersey.

Unlike Julian Eltinge he would wear his female costumes in the street in towns where he was touring. This created publicity for the show, but he was arrested several times, notably in Dallas where a policeman who had seen the show and recognized him, arrested him while he was on his way to Weil’s Department Store to exhibit his $5,000 wardrobe. 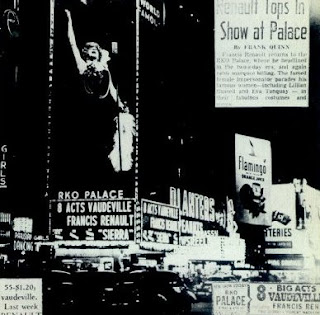 Out of costume he was a strong and masculine man, with many male admirers, one of whom was the young Archie Leach before he changed his name to Cary Grant. In his last years, Francis sang at Carnegie Hall billing himself as ‘The Last of the Red Hot Poppas”.

In 1945 he was crippled with polio, and was paralyzed for two years. He overcame this and returned to performing at Carnegie Hall.