Caroline was the youngest child of Frederick Hanover, the English Prince of Wales, who died three months before her birth. Her brother George became king of the United Kingdom and Hanover in 1760 as George III. 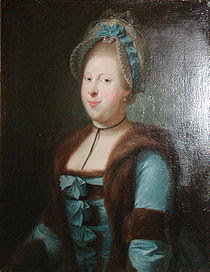 In 1766 when she was 15, she was sent to Copenhagen to marry her cousin Christian Oldenburg the king of Denmark and Norway. Like her brother George, Christian was subject to bouts of mental instability. He also spurned and neglected Caroline Mathilde. However in 1768 they had a son, Frederick.

Later that year, Christian made a tour of Europe and returned with the Prussian doctor and philospher Johann Friedrich Struensee, who had been appointed State Counsellor and the king’s personal physician. He had a positive influence on the king, and at first reconciled Christian and Caroline Mathilde.

However the King’s mental health deteriorated. Struensee became the effective ruler and issued 1069 reforming cabinet orders (more than three a day). Struensee and Caroline Mathilde became lovers. Her second child, Louise, is taken to be fathered by Struensee, but is officially a child of the king.

Queen Caroline Mathilde was frequently seen in frock-coat and vest, leather trousers, high boots and spurs and a man's hat on loose unpowdered hair, and was often seen on horse-back so dressed. She even dressed in this manner to state occasions.

In January 1772 Caroline Mathilde and Struensee were arrested in the middle of the night after a masked ball. In April she was divorced and deported to Celle in Hanover. Struensee was executed.