Yaron Cohen was born in Tel Aviv of Yemenite origins. At 13 he had told his family that he was transsexual. At 18 he was a drag performer, and had a hit with the single ‘Saida Sultana”.

Yaron transitioned to Sharon 1993 with surgery in London. She took the name Dana International from her first album, Danna International. She has been a recording artist since her transition. She has released 8 albums and 3 compilation albums. 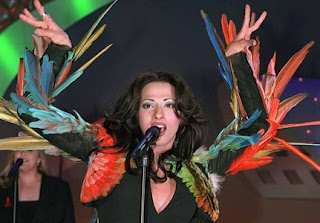 In 1994 she won the Israeli award for Best Female Artist of the Year.

In 1995 she was second in the competition to be the Israeli contestant in that year’s Eurovision Song Contest.

In 1998 she was the Israeli contestant in The Eurovision Song Contest, which she then won with the song ‘Diva’. This was controversial in Israel where Orthodox Rabbis and the Shas Party tried to have her selection cancelled.

The next year she sang Stevie Wonder’s song ‘Free” during the Interval of The European Song Contest, presented the awards and fell over onstage in front of an estimated audience of over 1 billion.

In 2009 Sharon campaigned in the election for the Kadima party.

In 2011she represented Israel again, and reached the semi-finals of the Eurovision Song Contest with her song “Ding Dong”.