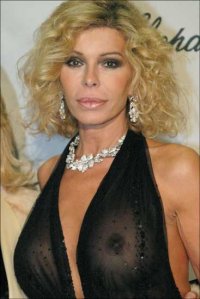 Manuel Fernández Chica was born in Tangier, Morocco, and raised in Malaga, Spain. By her early 20s she was living as a woman, Bibi Andersen.

The cis Spanish film star Victoria Abril played the lead transsexual in Cambio de Sexo, 1977.  Her character sees Bibi
(played by Bibi) performing in a show and is later mentored by her.

This enabled Bibi to get roles in television, and then in the 1980s she started being cast in movies as cis women with no suggestion of transsexuality,.  Notably she has played in several films for Pedro Almodovar (Matador, Law of Desire, High Heels and Kika).  Film-goers who had not seen Cambio de Sexo were usually not aware at that time that she was trans.

She sang her way into the Spanish pop charts with ‘Call me Lady Champagne’ and ‘Sálvame’.

She had completion surgery with James Dalrymple, FRCS, in London in 1991.

She was known as Bibí Andersen until 1998.

Bibíana is also a presenter on Spanish radio and television, and has done more than 100 films and television appearances. She was married from 2000-2003.

*Not the Swedish actress, Bibi Andersson.