Walter Carlos was born in Pawtucket, Rhode Island, and played the piano from the age of six. Walter took a bachelor's degree in physics at Brown University, and a master’s in music at Columbia University in 1965.

Working at Gotham Recording Walter became friendly with Robert Moog, the inventor of the synthesizer that is known by his name. Walter took naturally to the instrument, and managed to get a small advance from Columbia records to create what became the best-selling Switched-On Bach - a series of Bach compositions arranged for the synthesizer. This was one of the first classical LPs to sell over a million copies.

By this time, as Wendy, she had become a patient of Dr Harry Benjamin, and completed her transition in 1972. However Wendy was still 'Walter' to her audience. When writing the score for A Clockwork Orange she would dress as a man for meetings with Stanley Kubrick who later commented: 'I could tell he felt something was strange. But I didn't know what.' She appeared on The Dick Cavett Show disguised as man. In 1979 she finally told the world of her gender in an interview with Playboy. 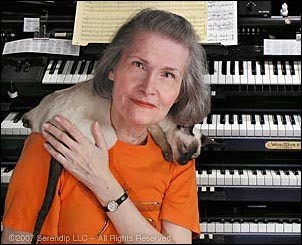 From that point all her albums carry the name ‘Wendy Carlos’.

Her hobby is eclipse chasing which involves flying to obscure parts of the globe.

In 1998 she sued Momus for a silly song called ‘Walter Carlos’ which suggested that Wendy would go back in time and marry Walter. Momus settled out of court, removed the song from the CD and paid legal fees.