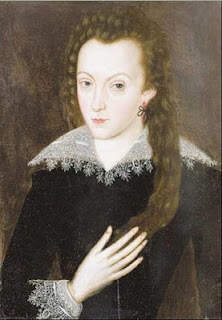 Henry Wriothesley was raised in Sussex. He became the 3rd Earl of Southampton at age 8 when his father died. He graduated from Cambridge with an MA in 1585, and was presented at Court at age 17. He became a favourite of the Queen, Elizabeth Tudor, and became a friend of Robert Devereux, the Earl of Essex.

He became a patron of poets: Thomas Nashe, Gervase Markham, Barnebe Barnes, and most famously William Shakespeare. Venus and Adonis, 1593 and The Rape of Lucrece, 1594, are explicitly dedicated to the teenage Wriothesley, and it is argued that the Sonnets were addressed to him. He was known as ‘Rose’ to those who dared. It has been argued that the family name was pronounced ‘Rose-ly’, and its heraldic devices included roses. Sonnet 95 alludes to ‘thy budding name’. Rose, en femme, posed for a portrait that has been dated to 1590-3 based on the expensive lace collar on his dress. Sonnet 20 addresses him thus:


'A woman's face, with Nature's own hand painted,
Hast thou, the master-mistress of my passion;
A woman's gentle heart, but not acquainted
With shifting change, as is false woman's fashion”.

In 1596 and 1597 Wriothesley sailed with Devereux to Cadiz and the Azores. In 1598 he married the pregnant Elizabeth Vernon, one of the Queen’s waiting women, for which they were both briefly imprisoned. In 1599 he went to Ireland with Devereux as part of the suppression of Tyrone’s Rebellion (Cogadh na Naoi mBliana, known in England as the Nine Year’s War). Southampton had an affair with Piers Edmunds, a fellow officer, and won a victory at Arklow in County Wicklow. 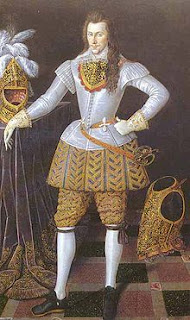 Devereux returned to England to a show trial and then attempted rebellion. Wriothesley was involved in this and they were both sentenced to death. Robert Cecil, Secretary of State, intervened to obtain commutation to life imprisonment for Wriothesley. When James Stuart became King of England, Wriothesley was released and recalled to Court.

He was a volunteer on the Protestant side in Germany in 1614. He financed the first tinplate mill in England, He participated in the East India Company, the New England Company and was active in the Virginia Company. In 1624 he and his elder son volunteered to fight for the United Provinces of the Netherlands against Spain. Both came down with fever and shortly died.