The tradition of Sworn Virgins, found in northern Shqiperia (Albania), Crna Gora (Montenegro) and Kosova, wherein born-female persons avoid marriage and adopt male dress, was a long time as a legend in the West, reported at best in brief anecdotes, almost as if the subject were part of crypto-biology.

One of the earliest reports was by Edith Durham, who at the beginning of chapter IV of her book reports of an incident in 1908:


We left early next morning for Seltze-Kilmeni, piloted by the old man, and followed a stony track to Rapsha whose people derive from Laj Gheg, son of Gheg Laz. 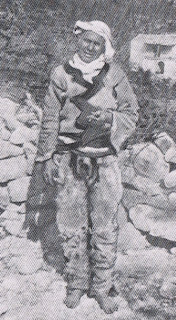 Here we found one of the Albanian virgins who wear male attire. While we halted to water the horses she came up—a lean, wiry, active woman of forty-seven, clad in very ragged garments, breeches and coat. She was highly amused at being photographed, and the men chaffed her about her " beauty." Had dressed as a boy she said, ever since she was quite a child because she had wanted to, and her father had let her. Of matrimony she was very derisive—all her sisters were married, but she had known better. Her brother, with whom she lived—a delicate-looking fellow, much younger than she —came up to see what was happening. She treated me with the contempt she appeared to think all petticoats deserved—turned her back on me, and exchanged cigar­ettes with the men, with whom she was hail-fellow-well-met. In a land where each man wears a moustache, her little, hairless, wizened face looked very odd above masculine garb, as did also the fact that she was unarmed.