++revised February 2022
Dedi Yuliardi Ashadi was born in Solok, West Sumatra, of Minangkabau descent. Both parents died when Dedi was one year old.  Dedi was raised in Jakarta by grandparents.

Dedi started singing in elementary school, and started performing in female clothing as a teenager, at first using the name Dorce Ashadi.

As Dorce Gamalama she completed transition in 1984 at age 21 with surgery in Surabaya.  Her legal gender change was recognised in 1986.  That year she took a husband, but the marriage lasted only two years.
She performed the Hajj twice, in 1990 and 1991.

She adopted four children, and owned several orphanages caring for thousands of children. She had her own morning television show and wrote her autobiography. She recorded many albums in both Indonesian and western styles.

In 2008 she attended the funeral of Imam Samudra, one of the men executed for the 2002 Bali bombings.

Her show was cancelled in 2009.
In 2014 Dorce encountered Joko Widodo (who became the Indonesian president shortly afterwards) on a plane flight, and for a while endorsed and campaigned for him.  Later she sold him a house to help raise funds for orphaned children in Palestine, Syria, and Indonesia.
In 2022, when she was already suffering Alzheimer's and diabetes, she contracted Covid.  She passed on at age 58. 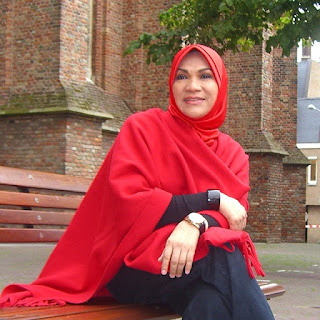 While she had expressed her obvious preference to be bathed and buried as the woman that she was, the Indonesia Ulema Council (MUI) has ruled that the body of a trans person must always be buried according to their gender assigned at birth. So, despite her final wishes, her family and religious leaders decided that she should be bathed and buried as a man.
EN.Wikipedia      IMDB    dorcegamalama.com
Time: 12:07