McGarrell was born in Rome to US expatriate parents and lived there until the age of 8. They lived in St Louis before moving to Vermont in 1993. 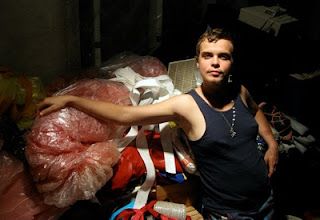 McGarrell did bachelor’s and master’s degrees in new arts and fibres at Maryland Institute College of Art, and a master’s in arts and technology from the School of the Art Institute in Chicago in 2004.

He was known for large scale inflatable sculptures that could envelop people, and was experimenting with plants and recycled materials. He was art director for the film Maggots and Men, about the 1921 uprising in Kronstadt in the USSR. He had a studio in Vermont and another in Haiti.

He died in the January 2010 earthquake.