Frank was the son of a factory worker in Cleveland, Ohio, who moved home because too many blacks had moved into the area. He had childhood fantasies of being a woman.  He married at 22, and they had one daughter. He read constantly on Hitler and the Nazis and his wife tried to ignore the issue. He worked in various factory jobs.

At 25 he suffered a head injury in a car accident. In 1977, he started dressing as female. As Frankie Ann, Spisak received treatment from the Gender Dysphoria clinic at Cleveland Metropolitan Hospital, lived as female full-time, changed her ID, saw a psychologist and started taking female hormones. She was also saving for surgery. She was fired from her factory job after turning up as female. Frankie Ann found employment with a maker of eyeglasses until found not to be a woman. She tried prostitution until charged with solicitation, and briefly worked as a Kelly Girl temp. When she brought a trans woman home for sex, her wife and daughter moved out. 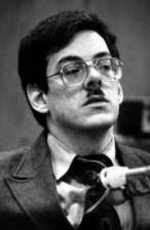 But in 1979 the Nazi Frank took over. He collected Nazi memorablia, and played Hitler’s speeches on his stereo. He was stockpiling guns and ammunition. He was also dating a black female prostitute. In February 1982 he found a black preacher in the next stall in the men’s toilet at the Cleveland State University Library and shot him dead. In June he shot a black man at a train station, who survived. In August he returned to to CSU and shot at a female student in the ladies room but missed. He became paranoid about a maintenance worker at CSU who might identify him, and so shot him dead, again in the men’s toilets. The next night he killed a young man waiting at a bus stop.

A week later he got drunk and shot his gun out of the window of his house. For this he was arrested, but was allowed to post bond. An anonymous phone call suggested to the police that they re-examine the guns that they had taken from Spisak’s house, and they were found to match those used in the killings.

Once arrested he admitted the murders, grew a Hitler-style mustache and carried a copy of Mein Kampf. At his 1983 trial, his attorney presented him as crazy but he was not found to be ‘legally insane’. He declared that he was under orders from God, and that Jews were to blame for his transvestite episodes, having seized control of his mind. The jury quickly found him guilty and sentenced him to death.

In jail, Spisak lobbied for a sex change, filed a lawsuit to force the state to refer to him as a woman, and appealed the death sentence. In 2006 the appeal court ruled that he had not received a fair defense and struck down his death sentence. In 2010, this was reversed.