Grant was born in Gippsland, and raised in a children’s home in Melbourne. In 1964 Grant fled to New Zealand to avoid imprisonment for dressing as female: New Zealand being the one place that Australians could go without a passport. 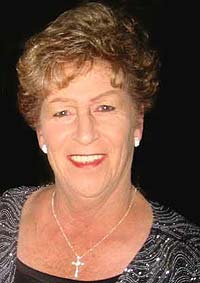 After being in the merchant navy for several years, and then being a restaurant/ nightclub owner, in 1970 Grant transitioned and became Jacquie. She married, and with her Maori husband adopted and fostered over 70 children for the Dept of Welfare.

For 15 years she managed the Moana Zoo and Wildlife park at Lake Brunner.

She served for two terms on the Greymouth District Council.

She has collected circular sock machines for over 30 years, she owns about 200 and owns a manufacturing business that makes them, and also a museum.

She also runs a motor camp at Hokitika.

Jacquie is the first transsexual NZ Order of Merit, Human Rights Review member, zoo manager  and the first to foster over 70 children.

What a role model.

She is not the first transgender museum keeper – that would be Charlotte von Mahlsdorf.
Time: 07:53