Peter Sewally was raised in New York City. He served in the State service (military duty). 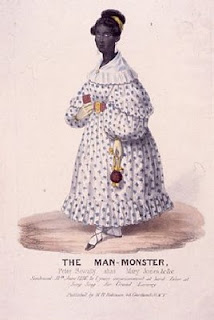 He lived by cooking and waiting for female prostitutes. He also met clients at the door and took the money. They encouraged him to dress as female, which he also did on a visit to New Orleans. During the day he would wear men’s clothing, but at night as Mary Jones he would entice men into dens of prostitution and pick their pockets. Numerous men were so robbed, but were not willing to appear in court.

On June 11, 1836, Mary robbed a man who confessed his story to a constable, who sought out Mary. He saw her throw away two wallets, arrested her and searched her apartment finding more wallets. He then, to his surprise, searched Mary and found that she was male-bodied. She was also wearing a false vagina, made from cow leather.

Five days later, it was Mary who appeared in court to be charged with grand larceny. The court, including his Honor the Recorder, laughed at the scene, and a member of the audience snatched Mary’s wig. Mary denied the charge. However the jury quickly returned a verdict of guilty and Sewally was sentenced to five years in the state prison.

Mary/Peter visited New Orleans.  That is he went to a slave state and came back.   How did black people do that in the 1830s?  Did they get a special letter from the local authorities, or what?