We have already met Matthew Ianniello (1920 – 2012) who co-ordinated what happened at the Stonewall Inn on behalf of the Genovese crime family.

Born and raised in Little Italy, Manhatten, and then Brooklyn, Ianiello returned from service in the Second World War with a Purple Heart and a Bronze Star. 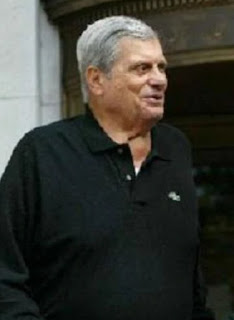 In 1951 he was arrested for possessing heroin, but the charges were dropped. He acquired the nickname ‘the horse’ either from the heroin (which is sometimes referred to as ‘horse’) or from the strength of his punch.

Under a negotiated arrangement he paid tribute to all five New York Mafia families.   A NYPD detective was quoted:


“You don’t run a bar and grill or sex establishment between 34th and 59th streets, from Fifth Avenue to the Hudson River, without Matty having a piece of the action.” (Johnson et al p250),


“In a large sense, Ianniello was the man who made Times Square the tawdry place that it was in the seventies.”

In 1972 he was in the kitchen of Umberto’s Clam house when Colombo crime family rebel Joe Gallo got whacked at 4.30am.

In 1986 he was convicted of racketeering and went to prison until 1995.  On release Ianniello became the acting boss of the Genovese family until 2006 when he was convicted again.  He was released in 2009, and died at home in 2012, aged 92.

By 1974 there was a lack of bars/nightclubs for trans persons in New York. The Stonewall had closed after the riots in 1969, and the Washington Square at Broadway and 3rd Street where Sylvia Rivera liked to drink had also closed.

The Gilded Grape opened that year as a mixed disco.  Drag Magazine described it as New York’s “sole and only drag hangout”. Gerald Cohen, from the Bronx, was the manager; Angel Caraballo was the doorman, and Matty Ianniello – of course – was behind the scene.  At first Cohen did not realize that there were trans women among his clientele. One evening, passing the ladies’ room, he found his enraged floorman with a hand up a woman’s dress. He made a decision: “if it looks like a woman it can use the ladies’ room”. Word spread and trans women came. 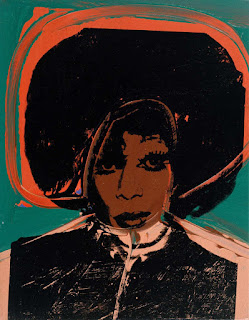 In 1974. Italian art dealer Luciano Anselmino suggested to Andy Warhol that he do a series of drag queen portraits, and named  Candy Darling, Jackie Curtis and Holly Woodlawn. It was pointed out to him that Candy was dead. Later Anselmino suggested doing a series of “funny looking” transvestites, those who were obviously men trying to pass as women. Andy suggested The Gilded Grape, where his entourage and rich European clients visiting Warhol’s Factory were sometime taken after dinner to witness the ‘dark underbelly of Manhattan nightlife”. The project started: Bob Colacello, artist Ronnie Cutrone and art student Corey Tippen found most of the models, including Wilhelmina Ross.


"We would ask them to pose for 'a friend' for $50 an hour. The next day, they'd appear at the Factory and Andy, whom we never introduced by name would take their Polaroids. And the next time we saw them at the Gilded Grape, they invariably would say, 'Tell your friend I do a lot more for fifty bucks’."

These large format polaroids were transferred to paintings as a silk screen. This became part of Andy’s “Ladies and Gentlemen” series first shown in Italy, September/October 1975.

The Gilded Grape announced a Miss Gilded Grape Contest, and the editors of Drag Magazine (some of whom were in the Queens Liberation Front) attended. Desi Duvall was turned out from the dance segment when people recognized her as a winner of previous dance contests; Cindy could not answer the questions as she spoke mostly Spanish; the winner was Eddie, a bartender at the Grape, in drag for the first time. The most sensational was Judy Bowen who spoke for ten minutes about her operations. Her operations seemed to count against her. Drag commented that rules against surgery should be spelt out clearly in advance. The third runner up, Miss Toni Stevens, was on the cover of the next issue of Drag Magazine. The next year, Toni won the Grape’s Broadway Award for the best performance in their regular Sunday Night Show.
Despite the publicity, The Gilded Grape declined to pay for an advertisement in Drag Magazine.

Tish Gervais (who many years later reverted to being Brian Belovich) and her friend Easha came:


“Still dressed as a boy, I secretly longed to be part of the transgender milieu. It was quite a scene; the Grape was a hodgepodge of every possible gender and sexual identity. While it was predominately transgender women, there was also a heady mix of gay men, lesbian women, bisexual folks, and tranny-chasing tricks. There was also a small group of transvestite men like those portrayed in the book, Casa Susanna, who liked to dress as women but were married with wives and families.”


“The crowd was an eclectic bunch. Remember the thugs, rapists and tricks? This made up a percentage of the population entering the Gilded Grape. There were trans girls, girls of trans experience, cross dressers, street punks looking for extra money, drug dealers, businessmen in female attire, transsexuals from all over the country, illegal aliens, kids dressed up as adults, and runaways."


"The Gilded Grape crowd was predominantly African-American, Jamaican, South African, Nigerian, Latino/a, Puerto Rican, Cubana, Mexicana, Dominicana, Panamanian, street-wise, transsexuals, drag queens, drag kings, hustlers and prostitutes. The tricks, Johns and tranny-chasers, were predominantly white. However, the bangy-boys were Latino and represented the many cultural groups I just described. The crowd was filled with tranny thugs, drug addicts, performers, wannabes, immigrants and our followers. The club was also filled with atmosphere, acceptance, community, safety, and a sense of family, as well as hate, remorse, hustle, desire, escape, and revenge. The music was loud with a mixture of disco, show tunes, salsa, and melodramatic sex vigilant reverberation.” (p 52-3)

Another at the Gilded Grape was Romain Atura who went to Dr Benito Rush and was approved for transgender surgery. The surgery was done by Dr David Wesser in 1976. She afterwards regretted the operation, although still spending time at the Gilded Grape. She killed herself a few months later.

The future film-star, the young Mickey Rourke hung out at the Gilded Grape for a while, and if a woman was being hassled by a trick, he was known to step in and help her.

Cohen, the manager, was interviewed by R. Thomas Collins Jr. of the New York Daily News:


“Drag queens, transvestites came to my place. I had a market and I served them. The only people I didn’t let in were whores. I’ve been harassed by the SLA and police. ... Once a cop told me they kept the pressure on me because the ‘establishment’ didn’t like drag queens. My lawyer has been fighting all the way. I wanted to stand by my customers. They’ve got a right to be that way.” …

“Of course I know Matty Ianniello, and I was being harassed by law enforcement just because he was reputed to be associated with the Mafia. My only connection with Matty is knowing him, and one of my partners at Jericho used to work at the Peppermint Lounge, when Matty owned it.”


“Although I felt comfortable in the predominantly trans atmosphere at the Gilded Grape on Eighth Avenue in Hell’s Kitchen, which was a short walk from our apartment, I was often anxious and fearful there. Instead of punching a time clock at some job, I went to the Grape to earn my keep. It was safer than working on the stroll in Times Square and the guys knew what they were getting looking only for those “girls with something extra” like myself. Being a younger trans woman might have made it easier for me to find tricks, but it also created tension with some of the heavily-seasoned regular girls who frequented the bar.”

The police of Midtown North Precinct were not amused at the uptick in trans solicitation. In three years Cohen received 26 tickets and repeatedly went before the State Liquor Authority.

NYC Mayor Abraham Beame (1974-7) had made a crusade to eliminate pornography and the trans bars in New York. This did not get very far. In April 1977 the Highways Commissioner Anthony Ameruso made a surprise visit to the Times Square area with the press attending and had workers use acetylene torches to cut down the canopies in front of four enterprises including the Gilded Grape on the excuse that they did not have permits for them.

No summons against Cohen was ever sustained, but his legal fees had added up to over $40,000, and now canopies had been destroyed. Exhausted, he voluntarily surrendered his liquor license a few weeks later. The Gilded Grape closed, and was reopened as the Grapevine. Some trans women still went there but others heard of a new place: the GG Knickerbocker Barnum Room.
__________________________________