Jean Webb was raised in Melbourne. She was in the Women's Royal Australian Air Force, and afterwards worked in shoe retailing, and in both had a number of crushes on and from women – one of whom later said to her:

However Jean desired to be normal, she married a man, became Mrs Dent and had a daughter, although she was uncomfortable with the female sexual role.

She explained all this to a psychiatrist who accused her of being a fantasist. A later doctor referred her to Dr Nuffield who was much more sympathetic. However he said to her:


"Why don't you just dress yourself in men's clothes?"

Jean did not relate to this suggestion.


“Don't you feel like a man?'
“How do I know? How does a man feel? I certainly do know that a change of clothes will not change what I feel.”
“You have never thought that perhaps you should have been born a boy?”
“Oh yes, I've thought that all right”. (p85-6).

So Dr Nuffield advised that she travel to the UK, as appropriate specialists were not then found in Australia - although he did not provide a referral. He did provide the address of Guys Hospital, London, and as an alternative, that of Professor Hamburger in Copenhagen.

Jean left in December 1962 leaving her daughter with her mother. In London, she found a flat and a job in shoe retailing. She was able to talk herself into becoming a patient at the Endocrine Clinic, Guy’s Hospital, London, where her primary contact was social worker Margaret Branch.

A psychiatrist, Dr Marks evaluated her and concluded, as Jean phrased it:


"He also explained that as far as he could ascertain from the facts he had I must have grown up with a rather masculine outlook, particularly when my independence and aggressiveness were taken into account, for my history showed a distinct inclination to lead rather than to follow" (p109).

A physical examination led to a rather different conclusion. She was told her that her chromosomes were 47 XXY, and she was becoming more male and that if she had waited another couple of years, she would not have been able to have a child. They explained that this extra chromosome altered her hormones and caused non-lesbian women to fall for her. They proposed surgery and hormones to turn her into a man, but they would not start doing this until she was divorced from her husband.

An ironic event in September 1965 was that she was arrested on Westminster Bridge by two police constables who assumed that she was a man in drag, an assumption quickly dropped when they arrived at the well-lit Canon Row Police Station.

After a long wait, during which she worked as a bus conductor and a store detective, in December 1967 and early 1968, her divorce became final, she had her hysterectomy, started taking male hormones, started wearing male clothes. He took the name 'Peter' which his mother had said would have been his name if born male.

The hospital arranged for a national insurance card, medical card and tax form in his new name, and also arranged for the Australian High Commission to issue a new passport, but the High Commission informed them that birth certificates were never altered. Mrs Branch commented:


“[This] I think is the most ridiculous thing I've ever heard! It's a pity you weren't British, there would be no hassle here.” (p203).

In January 1970 Guy's Hospital hosted an international convention, and Peter agreed to be interviewed by a panel of doctors.


“'Don't you get a thrill wearing men's clothes?' 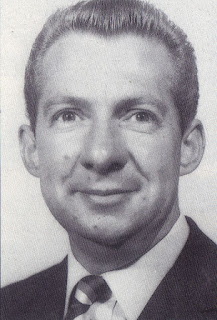 In 1974 Peter returned to Australia with his wife and started to reconnect to his original family, especially his mother and daughter. Again he mainly worked in shoe retailing.

One problem was that when he renewed his passport, “they stamped 'F' for female on my new passport right beside a picture of my bearded face”. (p249) This took months to sort out, and again Peter had to call on the assistance of staff at Guy's Hospital.

The Australian doctor in 1961 advised that there were no suitable specialists in Australia. An Endocrine Society of Australia had been founded in 1958. Perhaps Dr Nuffield was not aware of it, or perhaps he was aware that they had no members dealing with gender variance. Here is a history of the ESA.

A journey to Dr Hamburger in Copenhagen would have been futile in that the Danish Parliament had reacted to the Jorgensen affair by restricting sex-change operations to Danish nationals, as Charlotte McLeod had found in 1953.

“He also explained that as far as he could ascertain from the facts he had I must have grown up with a rather masculine outlook, particularly when my independence and aggressiveness were taken into account, for my history showed a distinct inclination to lead rather than to follow". Not disagreeing with the path that Jean/Peter took, but the reasons in this quote are not at all reasons to pursue a change of gender. Throughout the time that Jean was in London and attending the Clinic at Guy's, second wave feminism was building. Independence, aggressiveness and an inclination to lead were becoming valued traits in the women's movement.

Jean arrived in England in December 1962, and achieved a divorce in December 1967. It is not explained on what grounds. Five years was the period of separation to obtain a contested divorce following the 1969 Divorce Reform Act. It was not grounds under the 1937 Matrimonial Causes Act, which was until then in effect. Mrs Dent surely could not apply for divorce on grounds of desertion as she was the deserter. History of divorce in England.

Margaret Branch's comment re the Australians refusing to reissue a birth certificate is in retrospect quite ironic as she made it in 1968, only a short while before the start of the Corbett v Corbett trial which would close the reissue of UK birth certificates for transsexuals and some intersex persons until 2004.

Social Worker Margaret Branch apparently helped a lot of transsexuals in the 1960s and 1970s and has an amazing life story of her own. One of her relatives is working on a biography, but very little has been published.

There is no mention in Stirling's book of any of the prominent transsexuals in either the UK or in Australia. The lack of mention of Corbett v Corbett is particularly germane as he was in London as it happened.

A medical postscript confirms that Jean/Peter was born with a female-phenotype “Kleinfelters type syndrome”. It is often assumed that all Kleinfelters persons are male, and that therefore persons like Peter Stirling do not exist. There are alternate opinions – obviously as such persons do exist. The odd thing is that Peter is never mentioned in the discussion. Here is a recent article in OII Australia on female XXY persons, which yet again does not mention Peter.
Time: 21:17