Trans News Orleans: Part I - the early years to news of Christine Jorgensen

Part I: the early years to news of Christine Jorgensen
Part II: to the two fires of 1972-3
Part III: Activism and Legal Changes

There were two tribes living where New Orleans was later built:

La Nouvelle-Orléans (feminine) founded and named for Philippe II, Duke of Orléans, who was said to be queer.

Capital of La Louisiane is relocated to New Orleans, from Biloxi.

Marc Antoine Caillot of the Company of the Indies went as a shepherdess, all in white for the Carnival on Lundi Gras (the day before Mardi Gras).

Jean Bernard Bossu wrote of the Choctaw: “They are morally quite perverted and most of them are addicted to sodomy”.

Louisiana ceded to Spain in the aftermath of the Seven Years’ War.

After failure in the attempt to suppress Haitian independence, Napoleon sold La Louisiana to the US.

Louisiana, now in the US, enacted a criminal code copied from that of Mississippi which made sodomy subject to a penalty of life imprisonment with hard labor. The law was also applied to heterosexual acts, and was not struck down until 2003.

Following the colonial struggles in Haiti and Cuba, many migrated to New Orleans: 2,731 whites, 3,102 free people of color (of mixed-race European and African descent), and 3,226 slaves of primarily African descent, doubling the city's population. The city became 63 percent black.

Largest slave revolt in US history, in the so-called German Coast, outside New Orleans, was  brutally crushed

Louisiana became a US state.

The Battle of New Orleans. 18 days after the end of War of 1812, news of which had not yet arrived, the US Army with their Choctaw allies inflicted a major defeat on the British Army.

Peter Sewally/Mary Jones, a thief of African descent who normally lived in New York, visited New Orleans and transvested as was her wont.

The Choctaw, who had allied with the 13 colonials in the session from the UK in the 1770s, and with the US against the UK in the War of 1812, and notably at the Battle of New Orleans, were forcibly relocated so that their land could be seized.

Walt Whitman lived in New Orleans. There he wrote "Once I Pass'd Through a Populous City," a poem about New Orleans, in which he wrote "I remember only the man who wandered with me, there, for love of me."

Ludwig von Reizenstein having fled sexual-legal problems in Bavaria, wrote an anti-slavery gothic novel in German with gay and lesbian characters, Die Geheimnisse von New Orleans, which was serialized in the Louisiana Staatz-Zeitung.

The Mistick Krewe of Comus – the founding of the oldest of the carnival ‘krewes’ which initiated parades and balls at Mardi Gras. Into the 21st century this krewe has a prominence in the Mardi Gras parades. The costuming of the krewes provided a place for queer participants to hide in plain sight.

Cuban-born Loreta Janeta Velasquez had been convent-educated in New Orleans and eloped to marry a young army officer. She passed as male in the Confederate forces during the US Civil War.

During the occupation of New Orleans by northern forces, French language instruction in the schools was abolished. This was never reversed.

The Louisiana Democrat Party passed a constitutional amendment disenfranchising all non-white citizens including those blacks who had been free and enfranchised before the Civil War. Non-whites were also excluded from juries and schools were racially segregated. A case of an arrested black man Plessy v Ferguson went to the US Supreme Court which ruled that “separate but equal” provisions were constitutional.

The District, a 38-block area, was designated as the part of the city in which prostitution would be tolerated. This had been proposed by Alderman Sidney Story and the area became known as Storyville. Miss Big Nelly was the Madam of a gay brothel. The Frenchman’s was a small jazz club which was popular with trans women. The District played an important part in the evolution of early jazz, and was an area where queer persons were more comfortable.

As the US joined in the Great War, the city was pressed to close Storyville.

Alcohol Prohibition was introduced via the 18th Amendment and the Volstead Act. New Orleans largely ignored it and kept on drinking.

Pretcher, p18: “The social and sexual dynamics by which Storyville operated were still utilized by white uptown gays, but was the most beneficial for the city’s gay African-American population. Outside of nightclub acts, the most visible groups of cross-dressers in New Orleans were prostitutes. Many of these gender fluid prostitutes were of African American or mixed race and kept to the neighborhood where Storyville had once thrived. Evidence of black men in New Orleans performing in drag dates back to the 1920s. In the mostly non-white “drag balls” resembling Mardi Gras bal masques were a popular showcase for fashion and celebration. The drag balls appealed to both the gay and straight African-American community.”

Izzy Einstein, a top prohibition officer, was sent to New Orleans and made many raids, but the drinking resumed the next weekend. 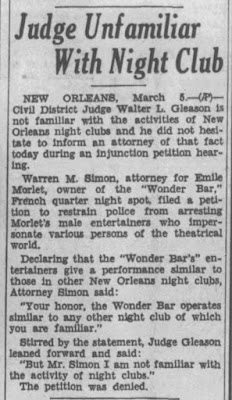 Emile Morlet opened The Wonder Bar at 125 Decatur Street, featuring female impersonators. Police harassment followed. Morlet tried to get an injunction to stop the raids but city officials denied his request because his club was a “menace” to morality.

Morlet moved his bar to the lakefront and renamed it the Wonder Club. Because the club itself sat on pilings over the lake and straddled the parish line, police raids were no longer a problem. The Cuban Gene La Marr was one of the stars. It was the only tourist attraction outside the French Quarter. Celebrities such Howard Hughes and Carmen Miranda were found in attendance, as were local mobsters.

The city passed an ordinance redefining “Vagrancy” to include “loitering, prostitution, or offering to procure another for prostitution, or any indecent or immoral act”. The last phrase was used to regard even the appearance thereof as cause for arrest.

Gay playwright Tennessee Williams moved to New Orleans where he wrote A Streetcar Named Desire in 1946.

In a series for the Times-Picayune, journalist and book author Lyle Saxon harangued those who would not wear a costume for Mardi Gras, and discussed it as an opportunity for transvesting, and its potentials for gay men. As Pretcher (p17) summarizes: “The opportunity to exploit this dissonance made Mardi Gras an especially important and exciting annual experience for closeted gay men and lesbians. New Orleans’ social emphasis on drinking and celebrating Mardi Gras also provided a unique environment in which the city’s gay population could foster a shadow community that allowed them to socialize by means unavailable in other American cities.”

A comprehensive criminal code revision was passed, reducing the maximum penalty for sodomy to five years' imprisonment, adding a fine of 2,000 dollars and making the hard labor provision optional.

After stints at various clubs in the mid-1940s, trans performer Patsy Valdalia joined the Dew Drop Inn, which was developing as New Orleans’ premier black club, and stayed for over 25 years as emcee, resident singer, waiter and bartender. She often performed with Bobby Marchan, and also hosted the New Orleans Gay Ball every year at Halloween.

Gay writer Truman Capote who had been born in New Orleans, returned and wrote his first major work, Other Voices, Other Rooms (which has one trans character).

The future Reed Erickson was the first woman to graduate from Louisiana State University in mechanical engineering.

Robert Tallant wrote several popular histories of New Orleans. In his 1947 book he discusses the ancient roots of Mardi Gras and wonders how many krewe members were aware of how it was based on transvesting and same sex desire.

The future Charlotte McLeod had served three months in the US Army before being medically discharged with a 4-F rating. McLeod found doctors sympathetic to the idea of a sex change, but they apologized that the US laws re Mayhem would not permit such surgery. McLeod was advised to “find such little happiness as I could in life by going to one of the ‘colonies’ that abound in our large cities”. In 1948, McLeod moved to the French Quarter in New Orleans, but did not fit in the gay world either. He did find work as a bookkeeper for $75.00 a week (a good wage at the time). He tried Boston for a while, but returned to New Orleans.

The Wonder Club was destroyed by fire, but was quickly rebuilt. Female impersonator Jimmy Calloway came from Birmingham, Alabama to perform briefly.

The Wonder Club was renamed the Club My-O-My. Pat Waters became the manager.

Little Richard was touring as Princess Lavonne in a red dress, but because one leg was longer he couldn’t wear heels.

Jimmy Calloway returned as Club My-O-My’s MC, and stayed until closure in 1972. All performances, singing by the performer and the orchestra were live. Recorded music and lip-synching were unthinkable. The Club was restricted to white performers and customers.

The owner of the building that contained Café Lafitte died and it was sold. The bar reopened but was no longer gay-friendly. The owners of the bar who had been unable to afford to buy the building, opened further down the street as Café Lafitte in Exile. However you were discouraged if not male and white. There was a rule that that women had to wear a dress. Lesbian Clay Latimer had no problem because “they thought I was a boy”.

McLeod, at age 28, read about Christine Jorgensen and her operation in Copenhagen. McLeod quickly packed, and went to Tennessee to tell father. With apparent parental approval, McLeod continued to New York and quickly took ship to Denmark using a minor inheritance from a grand aunt, sailing on the MS-Maasdam.

Bobby Marchan organized a troupe of female impersonators and they were booked at the Dew Drop Inn in New Orleans. He stayed and rented a room at the Dew Drop, where he started performing with Patsy Vidalia.

The following were consulted

·       Jelisa Thompson.  You make Me Feel: A Study of the Gay Rights Movement in New Orleans. BA Thesis. The University of Southern Mississippi, 2011.