Irving Ale was born in Vacherie, midway between New Orleans and Baton Rouge. His 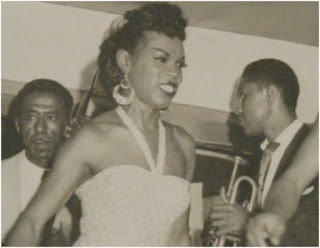 father died and his mother took him to New Orleans.

After seeing female impersonators, of whom one of the most prominant was Caldonia, he decided to become one and took his name from the sweet Vidalia onion, that was also slang for a prostitute.

After stints at various clubs in the mid-1940s, he joined the Dew Drop Inn, which was developing as New Orleans’ premier black club, and stayed for over 25 years as emcee, resident singer, waiter and bartender.

He often performed with Bobby Marchan. He also hosted the New Orleans Gay Ball every year at Halloween.

When the club went into decline in the mid-1960s, he took care of his mother whose health was failing, and then after that his own health.

He was an inspiration on the young Little Richard Penniman, who saw Patsy many times.