Kimberly felt like a girl from an early age.

She worked briefly as an bush pilot, but started living full-time as female in her mid-twenties, and applied to the Gender Clinic at Vancouver General Hospital in 1986. She completed transition in 1990. Afterwards she continued to apply for jobs as a pilot, but would be rejected when references were taken.

She suffered physical and emotional abuse from a boyfriend and was given support and advice in 1994 by the Battered Women’s Support Services (BWSS). In August 1995, she thought to give back to the community by volunteering at Vancouver Rape Relief (VRR). She did a telephone interview, and then a face-to-face interview, and was invited to join the training session. However at the break she was taken aside by facilitator Danielle Cormier, and her gender was questioned. She was then told “men aren’t allowed here”. Kimberly replied that she was not a man, but admitted that she had been through a transsexual change. She was asked to leave.

Kimberly filed a human rights complaint the next day. Rape Relief offered $500 for hurt feelings, and a personal apology. During the five-year wait while the British Columbia Human Rights Commission worked through its backlog, Kimberly secured the services of barbara findlay, a lawyer with a strong record as a feminist and as an advocate for GLBTT equality. Kimberly commenced volunteer training at BWSS, but later left after disagreeing about the role of trans women in the organization. She became a volunteer at Vancouver’s Woman Against Violence Against Women (WAVAW). 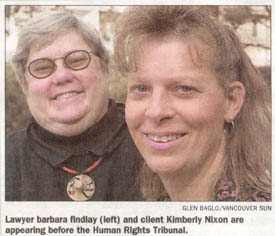 VRR went to the BC Supreme Court asking to throw out the human rights case on the grounds that the province’s 1984 and 1996 human-rights legislation did not extend protection to gender identity, and also because of the five-year wait. In June 2000, the Judge dismissed the argument based on undue delay in that VRR continued to discriminate against women not born as women, and ruled that while the legislation wording only prohibits discrimination based on sex, it cannot be interpreted to exclude someone "merely because that person or group is not readily identifiable as being either male or female”. Ms Nixon is a woman under the BC Vital Statistics Act and is entitled to a human rights complaint.

Also in 2000 barbara findlay was counsel for inmate Synthia Kavanagh, that she was entitled to surgery and transfer to a women’s prison.

Prominent Canadian feminist Judy Rebick, who otherwise has a long record of fighting for progressive causes, agreed to testify for Rape Relief. In 1997 Sheila Jeffreys wrote a paper that transsexualism should be seen as a violation of human rights. In 1999 Margaret O’Hartigan in opposition to the Portland Lesbian Community Project extending its services to those trans women whom Margaret referred to as ‘men’, had written “Post-modernism marches on: Women's space under continued attack”, citing Janice Raymond as part of her argument. Both these articles were added to the Vancouver Rape Relief & Women’s Shelter web site.

In 2002, The British Columbia Human Rights Tribunal in the person of Adjudicator Heather MacNaughton found that Nixon had been discriminated against, in that volunteering is equivalent to employment. Rape Relief was ordered to pay Ms Nixon $7,500, the highest award yet made by the tribunal, and not to discriminate against any transsexual woman, but declined to order Rape Relief to hold a “unlearning transphobia” workshop.

Vancouver VRR appealed to the Supreme Court of BC, arguing that Kimberly Nixon is immediately recognizable as a former man and as such would make some clients uncomfortable.  Also that she is not a real woman in that she does not have a history of living as a girl and then as a woman. VRR is entitled under BC law as a non-profit assisting a marginalized group to be a woman-only organization (a policy which Kimberly agrees with). The Supreme Court ruled in favour of VRR. Chief Justice Edwards noted in his judgement:


“By reason of Rape Relief's self-definition, perhaps reflected in its small number of members, exclusion from its programs is quite evidently exclusion from a backwater, not from the mainstream of the economic, social and cultural life of the province. It may be an important backwater to its members and to Ms. Nixon, but that is a subjective assessment.”.

Kimberly appealed to the BC Court of Appeal which issued a ruling in December 2005 which upheld Edwards’ ruling. Nevertheless it affirmed that Nixon is a woman, and that Rape Relief had discriminated against her.

In February 2007 the Supreme Court of Canada declined to hear the case without giving any reasons, as it does in 89% of cases. It also awarded costs, estimated to be $100,000, to Rape Relief.

The 2002 order from Adjudicator MacNaughton that the VRR not discriminate against any transsexual woman would oblige them to accept non-op and pre-op trans woman, so to that extent one can see why they appealed.  However VVR still declines to accept all women with known transsexual history.

The O’Hartigan and Jeffreys papers are still found on the VRR web site.

The VRR Chronology neglects to mention that the VRR went to court to argue that trans persons are not covered under the province’s human rights laws.  Nor does it mention that it added the confrontational O’Hartigan and Jeffreys papers.

The Wikipedia article on Judy Rebik fails to mention that she testified for VRR.

The Xtra article, 2007, argues that most Canadian women’s centres became trans inclusive because of Nixon v. Vancouver Rape Relief.  However the Globe article by Nolen, 2000, says that that was already the case at that time.

It is ironic that Nixon won a ruling from a female Adjudicator, and the feminist VRR won its rulings from male judges.

Nixon was read; she wasn’t tattled on.  VRR did raise the issue of her being read at one point, but the legal arguments did not pivot around it.  This is an issue that most of us don’t like to examine.  Kimberly went to VRR initially in stealth, and was read.   She later went to WAVAW known as a trans woman and was accepted.  What would be the protocol if a VRR rape victim being counselled did realize that the counsellor was trans and reacted badly to that?

barbara findlay is a noble activist who continued the fight long after Nixon’s legal aid had run out.
Time: 01:09