Paul Walker did research with John Money at Johns Hopkins Psychohormonal Research Institute, and graduated from the University of Rochester with a PhD in Social Psychology. 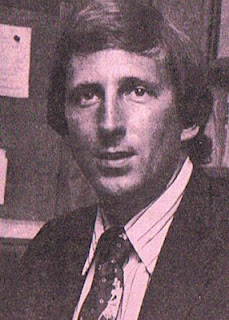 He taught at the University of Texas at Galveston Medical Branch where he started a sex offender treatment program and ran the Rosenberg Gender Clinic.

He was openly gay.

In 1977 he was the defense psychologist at Fort Rucker. Alabama, where a young female soldier was accused of homosexuality for marrying a trans man, Kristian von Hoffburg.

After Reed Erickson closed the Erickson Educational Foundation in 1977, Walker and Zelda Suplee formed Janus Information Facility which carried on the work of EEF. Walker also became the founding president of the Harry Benjamin International Gender Dysphoria Association (HBIGDA now renamed WPATH) and wrote the first Standards of Care for transgender clients with input from other members of his committee. 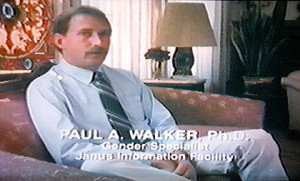 Dr Walker was recommended by the syndicated newspaper agony aunt, Anne Landers, and that is how Sarah Weston, came to him for counseling early in her transition.

Paul Walker later moved to San Francisco.   He died in the late ‘80s of AIDS complications.

The work of the Janus Information Facility was picked up by J2CP Information Services run by Jude Patton and Mary Elizabeth Clark.

*Not the actor.
EN.WIKIPEDIA

Paul was an amazing human being. Paul never turned his back on the community, often volunteering hundreds of hours to champion equal rights for the LGBT community. To lose him at such a young age in his career was a tremendous loss to our world at large.

I knew Paul Walker to be fascinating, personable, caring, a man totally dedicated in helping others, and a braver, or more intelligent human being I've yet to meet. Paul was well liked, one the most "connected" persons I have personally known. I lost contact with him after he moved to San Francisco, a move represented another phase of his brief but important life. To this day I think of him and miss him.

He was my psychoanalyst in Galveston, Texas back in the late '70s, along with Alice Webb. I wasn't aware until only recently that she too died. She died back in 2008. It is so sad that so many pioneering members in our community have passed.

Oh oh, he was my pych at his San Francisco Office.