Tortolini did a BS degree in physics and electrical engineering, and then worked for the CIA for three years researching Soviet comsats, and then did degrees in mathematics and philosophy, and worked for Lockheed and Hewlett-Packard.

After transition in 1980, Rachel did a degree in medicine at the University of Cincinnati from 1984-9, specializing in psychiatry and pathology, followed by a psychiatry residency at the Seventh-day Adventist Loma Linda University Medical Center. She did a study of intersex (broadly defined) patients, which led to the first version of her book under the pseudonym of Sarah Seton, and speaking engagements. This was not compatible with the ethos of the Christian medical center and she was asked to go elsewhere.

She became a general practitioner, and then a hospital and prison doctor in Hawai’i. From 2007 she has run a gender clinic, and revised her book on transsexuality. She contributed to the Intersex Guidelines mainly written by Milton Diamond and H. Keith Sigmundson that is featured on the UKIA site. She has also written and published a science fiction novel under the name of Abyssinian J. Kelly. She is also active in SETI, the search for extraterrestrial intelligence, and has worked for human rights for indigenous peoples of the Pacific.

The title of the latest version of her book is Transsexuality in the late 20th Century, which is so in that she wrote most of it around 1990. Her position is biologistic and that transsexuality is a type of 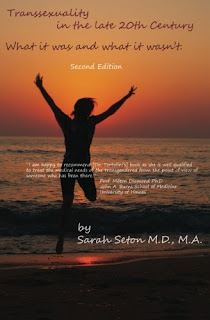 intersex: that “DNA mapping and advances in neuroanatomy have shown us that transsexuals are indeed inverted in sexual dimorphic areas of their brains (p xv)”, however like most biologistic accounts she does not explain or cite evidence to show how transsexuals differ in this biology from gays or transvestites, or why with each decade there are more trans people. She pays special attention to aromatase syndromes (p 40, 66-72).

Her designations of transsexuality vary from “simply a natural variation in human personality (p xii)” to “Gender Identity disorder (GID) is a rigorously defined syndrome not a blend (p xv)”. On p12 she writes:


“Unfortunately, this so-called ‘real life experience” (RLE) is not specific (although sensitive) to primary transsexuals; many effeminate homosexuals, transgenderists, and self-stigmatized transvestites have deceived themselves into believing they are ‘women’ for secondary gains and can negotiate the trial period successfully due to being gifted with a body habitus close enough to the sex-stereotypes”.

Remember that she wrote this in 1990 before the Blanchard-Bailey fracas, and before the HBS-notTG movement. In February 2010 she commented on Women Born Transsexual:


“Speaking as a clinician, I had no idea that the intersex diagnosis was being hijacked to self serving ends by some members of our community (?). I would also like to apologize here if I have in anyway contributed to encouraging this type of behaviour. “