In 1982 Celeste Tate and her husband David Cory McKinley (1963 – ) of Las Vegas  noticed how much dated food is thrown away by supermarkets. She persuaded a store manager to donate his expired items and she and her husband set up a charity supermarket, which she called The Gleaners. Food was given away, sold for a nominal amount or exchanged for work. Shortly afterwards they were credited with running 194 stores in the US and other countries including China.  Apparently this resulted from confusing the Las Vegas Gleaners with other food banks with 'Gleaners' in their name. 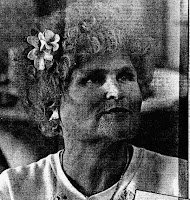 The US Department of Health and Human Services called The Gleaners the most outstanding food program in the United States. The Gleaners was touted at the 1984 Republican National Convention as a model of feeding the homeless while taking no government money. A letter from Ronald Regan praising them was read. Esquire and Newsweek magazines ran articles honoring the McKinleys.

The Las Vegas Review-Journal investigated and ran a series of articles 12-14 August 1990. They found that The Gleaners had failed to submit charity tax forms, reliable records were not kept, and the McKinley’s mortgage expenses were intertwined with other charity expenses. They also ‘tithed’ from the organization’s income to a store-front church whose pastor was on their Board of Directors. In addition, the articles outed Celeste as a woman with transsexual history.

David appeared on Sally Jessy Raphael’s television talk show complaining that he had been duped into a 13-year marriage in that Celeste had never told him that she had had a transsexual change. Shortly afterwards, Celeste agreed to an annulment but without admitting any change of sex.

In July 1991 David was arrested at a traffic stop when a records check showed that he was also Daryl Ashford was was wanted in Wichita, Kansas for aggravated arson in that he set fire to his mother’s house while she was inside. He was also wanted for jumping bail.

Ignoring The Las Vegas Review-Journal articles, the 1992 book, Megatrends for Women, lauded the work of the McKinleys.

In 1993 The Gleaners contracted with the for-profit fundraiser, The Charity Center, which passed onto The Gleaners 10% of the monies raised.

Celeste died at age 51 after a series of strokes and liver problems.