Lars was raised in Ramsberg, Sweden. He became a notorious thief famous for stealing from the rich. He often dressed as female supposedly to catch his marks off-guard, and to escape easily. However he wore female clothing on other occasions, and was said to prefer it.

He, as Lasse-Maja (Lars-Maria), was employed at one time as a cook in the Royal Kitchens.

He was caught thieving several time and imprisoned in the Örebro Castle, but was able to escape. He was caught again in 1813 after stealing silver from the church in Järfälla, outside Stockholm, and sentenced to life imprisonment at the fort of Carlsten in Marstrand. 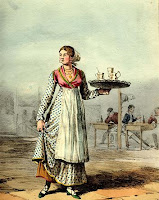 He was a model prisoner, worked in the kitchens, and wrote his autobiography. He became a tourist attraction for the upper-classes who spent the summer in Marstrand. Karl Johan Bernadotte, the Crown Prince, the future Karl XIV Johan of Sweden and Karl III Johan of Norway was one of these visitors, and many years later in 1839, he as king pardoned Lars and had him released.

Lars then toured the country talking about his life.


A film (IMDB) was made about Lasse-Maja in 1941, and there was a television series about him on Swedish Television in the 1970s.