Raoul Reginald de Veulle, the son of a former British vice-consul at Le Mans, was raised in Jersey. He finished his education, aged 17, at the Kensington School of Art. He picked up a few engagements in West End shows, but by his thirties, his stage career was over.

With the help of a gentleman admirer, William Cronshaw, he paid off his debts, and after a 1911 blackmail attempt on Cronshaw by the parents of another young man, Reginald had ₤500 and went to New York, where he picked up a taste for cocaine, and then Paris where he became a ladies dress designer.

He frequented social occasions where dressing as female was encouraged, and was present at a party in Maidenhead when locals started throwing stones, apparently having realized what was happening.

With the outbreak of war in 1914, de Veulle relocated to London and found work with a Mayfair costumier which specialized in theatrical work. In 1915 he fell in with show girl Billie Carleton when she modelled his creations. He also became the one who acquired her drugs and did other shopping for her.

In 1916 Defence of the Realm Regulation 40B was issued, and for the first time ever in the UK opium and cocaine, but not yet cannabis or heroin, became illegal (and remain so to this day). Also that year, Reginald married Pauline Gay, also a dress designer, who was five years older and lived a few doors away.

Billie was becoming a star. In 1918 when a US lieutenant kicked down the door of her flat in Longacre after she declined to marry him, she fled to the de Veulles. Reginald had previously bought cocaine from a couple in Limehouse, Lau Ping You and his Scottish wife, Ada, but had switched to Lionel Belcher, the film actor. Reginald hosted a cocaine party in pyjamas and nightdresses at his flat, for a group that included Billie Carleton, Belcher and others. Ada Lau Ping cooked the opium. 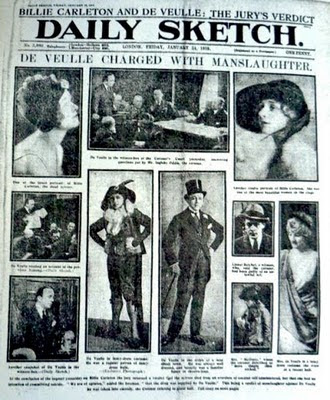 In September 1918 de Veulles was called up, but was declared to be unfit to be a soldier in that he was a cocaine addict. Following the Armistice in November there was a Victory Ball at the Albert Hall. Billie commanded a ‘wonderful frock’ from Reginald for the occasion. Reginald went as Harlequin. Billie followed the Ball by having friends at her flat until 5 a.m. Her maid found her dead in mid afternoon.

Ada was charged with supplying, ended up before an old-school judge and was sentenced to 5 months with hard labour. She suffered from tuberculosis and died, after release, in 1920 aged 29. Her husband, charged with possession came before a magistrate with local knowledge and was let off with a ₤10 fine.

The coroner at Billie Carleton’s inquest gave clear direction to the jury and in 15 minutes they found de Veulle guilty of manslaughter, and he was taken into custody. At his trial the next March he pleaded guilty to conspiracy with Ada Lau Ping to supply cocaine. Again the judge gave clear direction to the jury that he was also guilty of manslaughter but after 50 minutes the jury acquitted him. He was sentenced to eight months without hard labour for the conspiracy.

De Veulle is recorded as the costume designer for a 1926 stage musical, and in 1933 the Obelisk Press in Paris (whose best known book was Henry Miller’s Tropic of Cancer) promised ‘a book of formidable revelations’ by de Veulle, but it never appeared. Other than that Reginald de Veulle disappeared from history after his release.