Jonathan was raised in a Jewish family in suburban New Jersey. He studied at Princeton, and his first novel, I Pass Like Night, 1989, was his senior thesis.

In 1990 he flirted with an older woman in a bar in Pennsylvania, and the memory stayed with him. 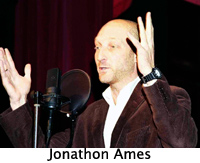 In 1992, Ames moved to New York, started sharing an apartment with an older man, and succeeded in becoming a columnist at The New York Press. Looking for inspiration for his second novel, he took up boxing and also started spending time at Sally’s, the transgender bar on 43rd Street, across from The New York Times. He turned much of this into his second novel, The Extra Man, 1999, in which Louis Ives is fired from a New Jersey prep school after being caught trying on a bra, moves to New York, shares an apartment with an older man, and spends time at Sally’s where he is unsure whether he is a budding transvestite or a tranny chaser. His apartment mate later catches him in bed with a trans woman.

In 2001, Ames was sent Aleshia Brevard’s The Woman I Was Not Born to Be that he should write a blurb for the book, and remembered that the woman in the bar in Pennsylvania in 1990 was also Aleshia. He noted “a rash of books” on gender changes: Suits Me: The Double Life of Billy Tipton, As Nature Made Him, Crossing,


Also around this time, Jonathan Lethem gave me a copy of The Vintage Book of Amnesia, which he had edited, and I thought to myself, I want to put together an anthology, it looks like easy money. So I asked Lethem how much he was paid for the book and he told me a rather high number, which turned out to be all wrong. But I didn't discover that until much later. Thus spurred by visions of money, combined with the confluence of all these gender books, I got the idea in my head for an anthology whose unifying theme would be the changing of one's sex. I was going to include transsexual memoirs, the Middlebrook and Colapinto books, some stuff on hermaphrodites and transvestites, and works of fiction that featured transsexuals. Gore Vidal, Jerzy Kosinski, John Irving, and David Ebershoff all had novels that qualified on this front, and I figured I could self-promote and include a passage from The Extra Man.

I was teaching then at Indiana University, so I used the Kinsey Library and Xeroxed about a thousand pages of material and sent it off to Vintage. They made an offer that was one-third of what Lethem had told me he got. I checked with him and he realized he had made a mistake.

I was disappointed but took their offer, and the editor and I decided I should whittle the book down just to the memoirs of transsexuals. Then it was such a pain in the ass  to get permissions--I had naively thought Vintage would do this for me--that I didn't do anything with the book for years. I kept waiting to make some money from Hollywood so that I could pay Vintage back the first part of my advance. Then some money from Hollywood did come in, and instead of giving up on the anthology, which I had been privately referring to as the "tranthology," I hired someone and he did everything and now the book is out! So the book is about sex and I did it for money. A classic tale! (Ames & Ames 2005).

Given that Ames is quite out about having a thing for trans women, it is odd that the Wikipedia page about him mentions it not at all.

The selection of excerpts in Ames’ anthology is - how shall we say – conservative.  It you have read several trans biographies, you will have read most of them.  The book would be much more rewarding if he had sought out the less well known biographies, and perhaps translated some that are not currently available in English.  But that would have been more work.

Here is the trailer for the film version of The Extra Man.  Notice how the trans content is just not there.