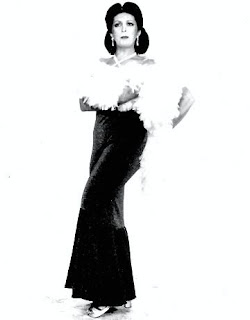 Noberto David Chucri was raised by Lebanese parents in Rio de Janeiro. He graduated from the Faculdade Nacional de Filosofia in philosophy, psychology and history, and became a history teacher in the public school system. Here he would sometimes take advantage of the syllabus to appear in drag, for example as Cleopatra when teaching Egyptian history.


Under the name Laura de Vison, he was also a well-known transformista from the 1970s to the 1990s. In particular he performed at the bar Boêmio. In a ninety-minute act he wore many of his almost 100 dresses. 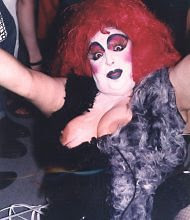 After 18 years as a teacher he was fired after he answered student questions about the sexual transmission of Aids. Later he was arrested during a police purge and spent 10 days in jail.

He was often compared to Divine. He has been in eight films, and several television series. He was Gluttony for a samba school float in Carnaval.

He died at age 68 due to complications after surgery for a hernia.
PT.Wikipedia.
Time: 07:30