Michael and his elder sister were left at the Baptist Children’s Home in Memphis, Tennessee when he was three. He was sexually abused in the home and later in the scouts. He and his sister were adopted by the same parents when he was nine. Michael had been called ‘Butch’ at the home, and his new parents continued this. 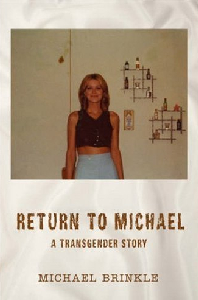 When he was 18 he ran away to Baltimore because he had heard about sex changes at the Johns Hopkins Hospital. He worked in a restaurant, and started going out in drag. He found Inferno, the local drag bar. Kelly, a cis woman stripper, had him move in as a roommate so that her boyfriend would not come back.

Michael became Michelle, became a dancer and turned tricks. She went to New York for silicone injections. She never did register at Johns Hopkins. Another trans woman told Michelle about the operations in Casablanca, and together they applied for passports, but had to make a scene at the Passport Office before they were given the application forms. They flew to Casablanca, but Dr Burou didn’t want to perform on Michelle as she was only 19, but eventually after her pleading he took her $2,000 and did so.

On return, Michelle phoned her mother and let her know what had happened. The mother came to accept her second daughter, but still called her Butch. Michelle also had to report to the draft board where the doctor made her disrobe where others could see.

Her first lover was AWOL from the army and already married. They visited each other’s parents but he was constantly chasing other women, until she tired of that and left him.

Michelle and Kelly worked together as exotic dancers. Only some years later did Michelle have electrolysis, to remove her light beard growth, and legally change her name. She married Kelly’s brother, Frank, in Chicago, who did deals and petty crime and was very jealous. She left him and went to Hawai’i where she got a job in a nightclub. Frank somehow traced her, and brought her home at gunpoint. They moved to Memphis. He pulled a job in the club where she was working, and after a few more robberies was arrested. She stayed by him the two years he was in prison. They then separated by mutual consent. Frank later got 12 years for shooting and wounding a policeman.

Michelle stopped taking female hormones because they were increasing her weight. At age 28, with her parents encouragement, she went to beauty school and qualified as a cosmetologist.

The next year she read the Bible and decided that her life was wrong in eyes of God. As Michael, he had his breast implants removed. He still has a high voice and is still sometimes addressed as ‘ma’am’. He joined a church and told of his past, and was accepted. He kept in touch with both Kelly and Frank for some time, but finally drifted away. He attended his mother’s funeral as Michael in 1987, and his father’s in 1994.

Other than his own autobiography, I am unable to find any information about Michael Brinkle.

On p38 Michael tells: “A so-called doctor came to town [Baltimore] every so often pumping the girls and trans-genders full of silicone.  We called him ‘Dr Plastic’.  He mixed the silicone in the bathtub!  Rumors were going around that he used ‘Turtle Wax’! No, he didn’t finish us off with a buff cloth either!  He was later arrested and put on trial for killing that trans-gender.  Kelly was supposed to testify against him but she started getting death threats over the phone.”     This would be about 1970, a year after Stonewall.  The Johns Hopkins Gender Identity Clinic was still operating.  Can anybody identify this so-called doctor?

The book is 63 pages of text.  It is then followed by 40 pages, 40 photographs all of Michael before he ran away to Baltimore.  The only photograph of Michelle is that on the front cover.  No photographs of Michael after 30 are provided.  Nor does Michael tell us how he made a living after returning to being Michael.

On p40, there is a remarkable apology:  “Could I stop here a moment and confess something else in my memories?  I’m really ashamed to admit today that most of the men I had sex with didn’t have a clue about my real story.  I think that it must have been an inner desire to get revenge on the whole male population for the abuse that they gave me.  To this day they probably still don’t realize that they had sex with Michael and not Michelle.  At the time it was thrilling for me to know that they had no idea that they were enjoying sex with a man but in their own minds were having sex with a woman.  I really wasn’t in my right mind, was I?”   ----- I think that most of us will disagree with this paragraph.  Michelle thought that she was not a real woman, which partially explains why she changed back.

Michael thinks that being sexually abused and the absence of his biological father explains his trans nature.  If this were so, there would be many more transsexuals.
Time: 18:33