++Revised September 2012 with feedback from Dallas.

Dallas was raised in an army family and as a child lived on and near military bases all over the world. When he was 13 the family settled in Tennessee. At age 22 he married, and at 28 was divorced. After college and graduate school he worked for the state government of Tennessee as a child protective worker and then as a psychological examiner. He held a license to practice psychology in Tennessee from 1980 until the mid-1990s, retiring it after moving to Georgia.

In his teens, Dallas started going out in public dressed as a girl. He was ready to transition gender roles, but had no idea how to go about it.

At age 30 he paid $500 to apply to the gender identity program at Vanderbilt University in Nashville. After evaluation he was told he was not dysfunctional enough to receive sex reassignment services. Determined to transition with or without the help of the clinic, he immediately began to research transsexualism at the university’s medical library

At that time no physicians in Nashville would prescribe hormones to him and the drag bars wouldn't grant entry when he was crossdressed. With no legal avenue for hormones, and having never met even one other transsexual, 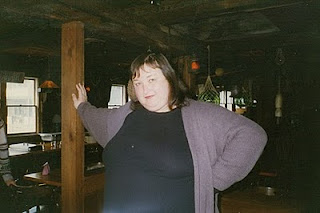 Dallas stole part of a prescription pad and self-prescribed Diethylstilbestrol (DES), a medication now prohibited because of carcinogenic properties. He feminized over the next ten years.

The same year--1979-- Dallas reached out for support, but found only The Society for the Second Self (Tri-Ess) , the national group for crossdressers with a no-gays-no-transsexuals policy. After corresponding with co-founder Virginia Prince, he declined to join. Ten years later he looked for support once again, and once again found only Tri-Ess. Dallas lied about his transsexuality and joined. Through Tri-Ess he soon learned of a transsexual support group in Atlanta and contacted it, letting his membership in Tri-Ess lapse.

Dallas completed electrolysis in 1989, and had surgery with Dr Seghers in Brussels in 1991. She resigned her position as a psychological examiner and moved to Georgia, transitioning en route. Her female lover was not able to accept the change, and their long-term relationship ended. She kept the same first name, Dallas, it being androgynous.

She immediately found a job as a behavior specialist in Metro Atlanta, working with adults with developmental disabilities. She held that position until her retirement at age 60.

At the request of her family, Dallas did not call, write or visit for more than ten years. One of her sisters re-established contact in the late 1990s, but she didn't see or correspond with her other family members until her mother phoned her six months after her father's passing in 2001.

In 1990 Dallas founded the American Educational Gender Information Service (AEGIS) and the journal Chrysalis: The Journal of Transgressive Gender Identities. She was Executive Director of AEGIS and Editor-in-Chief of Chrysalis from 1990 until 1998. In 1993 she founded the US National Transgender Archive and Library, which now resides in the Labadie Collection at the University of Michigan. She was director of Montgomery Foundation for a year.  Atlanta Gender Explorations, an open support group she founded in 1990, still meets monthly. She was a principal in the founding of the transgender conferences Southern Comfort Conference and FTM Conference of the Americas.  Also in 1990, Dallas, after much persistence, was one of the first trans professionals permitted a membership in HBIGDA (now WPATH).

Dallas was editor of IFGE's Transgender Tapestry magazine from 2000 until 2008 and director of the transgender conference Fantasia Fair from 2003 until 2007. She has written many booklets and articles on transsexualism, many of them published by AEGIS, nearly 20 chapters for textbooks, and the texts Gender Dysphoria: A Guide to Research and Current Concepts in Transgender Identity, acknowledged by Richard Green as the first books on transsexuality by a transsexual. In 2003 she and many others spoke out against Michael Bailey’s The Man who Would be Queen.

She is now a resident of the village of Pine Lake, Georgia, the world’s smallest municipality with a transgender non-discrimination ordinance.

In her essay for The New Goddess, she wrote:


My betwixt and between financial status has helped me see the full panorama of transgender behaviors, for I've commingled with the rich and the poor, cross-dressers and transsexuals, the passable and the impassable. I know transsexual people who have managed to hold onto their jobs during transition and those who have been fired, and transsexual people who have deliberately walked away from their old lives to forge new ones. 1 know those whose middle-class lives fell apart when they started to deal with their gender issues, and who now live in reduced circumstances. And 1 know those who ... have never had and never will have a middle-class life, who have wound up on the streets because they were courageous enough to deal with their gender issues at an early age, and because, with their early experiences and upbringing, there was no other place to go other than the street.

In their youth, transgendered people have a terrible choice: they can be true to themselves, for which they will be at grave risk for winding up dead; or they can keep others happy by stifling their innermost selves. The choice they make will determine the path they walk through life: marginalized, rejected, harassed by others, forced into low-paying jobs or into sex work, but able to be themselves; or comfortably middle-class, with all the privileges pertaining thereto, but having to keep the closet door firmly closed as their bodies become progressively more masculine - or, for FTMs, more feminine.  Neither choice is satisfactory; either has grave consequences. Who could be blamed for walking either of these roads? (p113-4)

I don't think there are two different types of transsexual people, as a number of clinicians have reported; I think there are only people who, at the fork in the road, have made different choices, and who have been shaped by those choices. Some face the risks and pains associated with transitioning early, and some delay their choice and inherit the risk and pain associated with transitioning later in life. Often, these choices are made out of consideration for others, by the circumstances of their lives and relationships, or by happenstance. I know my own life has been influenced by chance. (p115)


*Not the Country singer.