Ewa was raised in Warsaw.
She became a cha 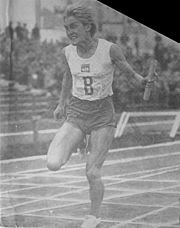 mpion sprinter and won a gold and a bronze medal for Poland in the 1964 Olympics in Tokyo. In 1965 she set a world record for 100 metres with a time of 11.1 seconds. In 1966 she won two gold medals at the European Athletics Championships in Budapest.

In 1967 she failed the new Olympics gender test when she was discovered to have an XXY phenotype. Her Olympic medals were taken back. She was subsequently banned from professional sports.

She later married and gave birth to a son.

She was rehabilitated in 1999.