Francine had been intended as the star of Flaming Creatures, 1962, but disappeared pa 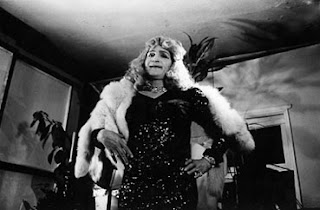 He was given star treatment in the Andy Warhol/Paul Morrissey film Lonesome Cowboys, 1968, as a the transvestite sheriff. The camera lingers as he puts on drag and makeup. This in a cowboy village partly owned by John Wayne.

One wonders if there is any connection with Francis Francine Hodgkiss? Had Frank di Giovanni perhaps caught her show and remembered her name? Maybe.
Time: 08:06