Roger Wyatt was raised in London with eleven sisters and two brothers. One of his jobs after school was as an elephant groom with the Bertram Mills Circus.

He did his National Service in the Royal Army Medical Corps.

Afterwards he changed his name to Chris Shaw, and started working pubs and workingman’s clubs doing a drag and singing act with bits of comedy and opera. He also took dance and singing lessons. He had a high counter-tenor voice. 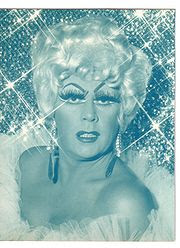 He teamed with Peter King, a piano accompanist, and they had a successful double act. In 1959 they started King Shaw Productions with an office in Bond Street. They produced all-male variety shows, drag acts and fancy dress balls. In the early 1960s Chris performed at the Hoxton Music Hall with Dorothy Ward (1890 – 1987). In 1965 he performed in the West End in The It Girl for six months.

In 1966 Chris and Peter published a pictorial book on female impersonation.

King Shaw productions started the drag shows at the Vauxhall Tavern in south London; they put on Holiday Showboat at The Playhouse Theatre in Jersey for three years; they organized drag balls at various London town halls.

In 1967 Chris did a tour of South Africa and Rhodesia called Boys Will Be Girls. He fell in love with a Rhodesian, sold his half of the agency and his house in London. He opened a nightclub in Salisbury (now Harare) and brought out top cabaret acts from the UK. However as the struggle for Zimbabwean independence developed, Chris moved to Cape Town in South Africa, and in 1973 he moved to Sydney, Australia.

He was soon top of the bill in Sydney nightclubs, and performed Cinderfella at the Bull and Bush for over a year. He worked for the next 30 years on Sitmar and P&O cruise ships. He did a pantomime in the UK most years. In the late 1990s he played Al Jolson in an Australian minstrel tour, and also in mufti did a concert tour playing music hall songs. He was still performing in his 70s, but died age 74.