Stanisława Walasiewiczówna was born near Rypin, Poland. Her family emigrated to the United Sates when she was three months old. They lived in Cleveland.

In 1927 she won a place on the US Olympic team, but was disqualified in that she was not a citizen, and could not become one until age 21. So she ran in Polish diaspora sporting events, and won five gold medals at the Pan Slavic games in Poznań. She then joined the Polish national team. She also continued to run in US a 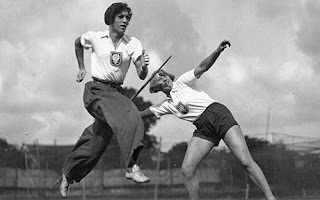 mateur events under the name of Stella Walsh.

In 1930 she was voted the most popular Polish athlete. She ran for Poland in the 1932 and 1936 Olympics winning five gold, three silver and one bronze medal.
At the time it was commented that she had rather extraordinary musculature and excessive body hair, and that she ran like a man. At the 1936 games, Walasiewiczówna was narrowly beaten by Helen Stephens of the US. This aroused suspicion and Stephens was obliged to submit to a genital inspection. 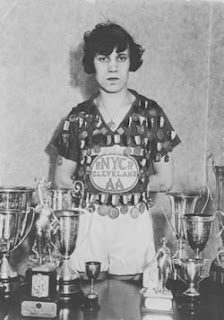 mpeted only in amateur events. In 1947 she became a US citizen. She won her last US title at age 40.

In 1956 she married boxer Neil Olson; they separated after eight weeks, but never divorced, and she continued to use his surname.

In 1975 she was inducted into the US Track and Field Hall of Fame. She retired to a suburb in Cleveland and dedicated herself to working with children in athletics.

In 1981, as a bystander, she was fatally shot during a robbery at a Cleveland department store. It came out during the autopsy that she had both male and female chromosomes, mosaicism, and ambiguous genitals. The US Olympic Committee announced that there would be no attempt to posthumously retract Walsh's Olympic medals.

Walsh was sometimes beaten by other women, and her finishing times were in line with the women's statistics of the thirties - not the men's.