Patiño was Spain’s best female hurdler. She competed at the 1983 World Track and 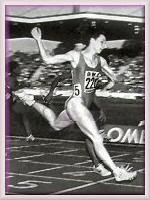 Field Championships in Helsinki, where she passed the Barr Body test based on a buccal smear and was given a Certificate of Femininity.

In 1985, at the Kobe World University Games, she had forgotten her Certificate and was retested. This time she failed the Barr Body test. She was subjected to a complete karotype analysis which took two months to complete, and she was prevented from competing. The Spanish officials asked her to fake an injury, and she did so.

The karotype analysis showed that she was 46,XY, that she is a woman with Androgen-Insensitivity Syndrome (AIS). For the January 1986 Spanish National Games, she was again told to feign an injury, but she insisted on competing, and she came first in the 60m hurdles. Her test result was revealed to the press, and she lost her medals, the running times were erased, she lost her scholarship, her fiancé and was ejected from the national team.

She was supported by Albert de la Chappelle, the Finnish geneticist, and Alison Carlson, the US coach and journalist. A Spanish professor presented the medical evidence to the Olympic Medical Commission at Seoul in 1988. She was reinstated on the grounds that her body could not use the extra testosterone, and thus she had no unfair advantage. She was given a new Certificate of Femininity that exempted her from further sex testing. However her momentum as an ath

lete was lost. She failed to qualify for the 1992 Barcelona Olympics by hundredths of a second.

She then retired from sports and did a PhD on women in sports. She teaches at the University of Vigo.

It is a shame that all this nonsense is happening again with Caster Semenya.
Time: 17:36