A nightclub in Berlin that was open 1958-2008, at Marburger Straße 14 in Charlottenburg, that was the oldest surviving Travestietheater in West Germany. It was a smallish bar with a capacity of only 150. Local artists included Marcel Andre and Gloria Fox. From France, and specifically from Le Carrousel came Coccinelle, Everest, Capucine; from the US came Sonne Teale, Angie Stardust, Ricky Renée. 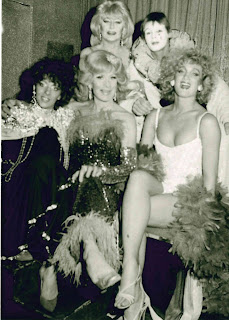 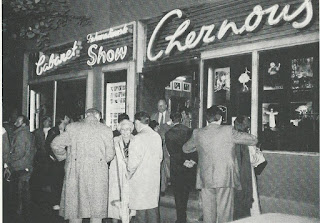 The original choreographer and costume designer was Yvana who established the clubs original image. He was succeeded by Le Boy, from London. And in turn he was succeeded by Manel Dalgó.
Like Le Carrousel, Chez Nous became a brand name, under which performers from Chez Nous performed to packed houses across Europe.

Peki de Oslo (the future Amanda Lear) did a striptease show in 1962.

The Michael Caine/Harry Palmer espionage film Funeral in Berlin, 1966, featured a scene shot in Chez Nous – although they avoided including any trans women who could pass or who were attractive – such as Ricky Renée:


Ricky Renée had been one of the early artists who made the club famous. In 1966, in London entrepreneurs Ray Jackson and Eric Lindsay had contracted with Sonne Teale that she would would have a third share in a new club to be called Sonne Teale’s. While renovations were being done to the building, Sonne headlined in a Carrousel tour of Japan. However she and three other performers were killed when their return flight crashed. Ricky Renée had been working at Chez Nous for some years, having made Berlin his home. Lindsay phoned and offered the same deal to Ricky that Sonne would have had. Ricky accepted.

Tobi Marsh, ex-Jewel Box Revuew and the 82 Club, 1968, got a contract to do four shows a night at the Chez Nous for US$200 a week. Even though accommodation was arranged via personal contacts at the club, the first landlord objected to overnight male visitors. 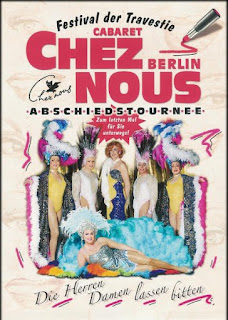 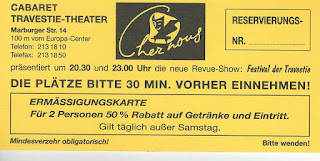 Working the bar and waiting since 1978 was Daisy St Denise, an ‘Urberliner original’. She opened her own bar after Chez Nous closed.

Homosexuality was partially decriminalised in West Germany in 1969, a year after East Germany had done likewise.    Most of the information about Chez Nous refers to pre-1969 when homosexuality was illegal.  Much of it sounds very old fashioned.  In particular the performers were obliged to arrive and leave in mufti - not in 'costume' as was then said.

This of course changed  later in the 1970s when artists such as Jayne County and Romy Haag became dominant on the Berlin scene.