John Dale Harvey was raised in Greeneville, Tennessee until age 12 when his family moved to Cincinnati.

As a teenager he started working as a amateur female impersonator, and at 19 was a member of the Jewel Box Review - where he took the name Tobi Marsh. He joined just after Dorian Wayne left creating a vacancy. In the early 1960s he was engaged at Club 82 where Tony Midnite was doing the costumes. 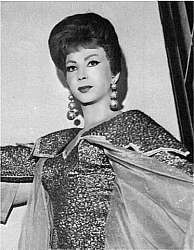 Tobi's lover was the 6'5" (1.96m) Yale-educated lawyer Sandy. Sandy liked to say that he was five foot 17 inches. He was a regular in Virginia Prince's FPE organization in New York, where he rarely wore female clothing, but did show photographs of himself so dressed.  He was also part of the local bondage community.

Tobi had a part in the 1971 film, The Love Thrill Murders/Sweet Savior with Troy Donahue, as a hair-dresser in drag who is killed. He was also in Devil in High Heels, Grand Illusion, The Bedroom Window 1987.

Tobi did an European tour appearing at Chez Nous in Berlin (where his landlord subjected him to homophobic abuse), Madame Arthur's and Le Carrousel in Paris, but came home disillusioned:


"The local entertainers were resentful of Americans working in their countries. The standard of living was below par for an American. I cancelled my contract and came home." 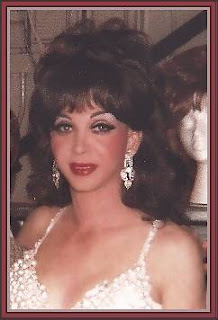 One presumes that Prince was not informed about Sandy.   While male lovers of trans women are mainly straight, in the 1960s Sandy would have been taken as gay for having Tobi as a lover.  And into bondage too!
Time: 08:34