​Himschoot was raised as a girl in Colorado, the middle child of three – but always felt like a third brother. They were raised on “church potlucks and belief that homosexuality – never mind transgender – was just awful” (quoted in Draper).

Intrigued by the lore of Emily Dickinson, Himschoot did a BA at Amherst College in Massachusetts, which led to an encounter with the United Church of Christ (UCC), and enabled a new-found mental wellness and a shedding of fundamentalist guilt and shame. After graduation Himschoot worked as a small-town journalist, but felt more inclined to give counsel and comfort than to write. While volunteering to help orphans in Guatemala, Himschoot realized a calling to be a minister.

The parents were devastated when told of his gender identity, but while they did not condone, they did not shun either. In 2000 Himschoot was accepted at Denver’s Iliff School of Theology, and in 2001 participated in a consultation for trans people in the UCC’s national LGBT Concerns Office in Cleveland. Also that year the UCC featured him in a documentary film, Call Me Malcolm, that followed him around the US meeting other trans people and talking about his faith.


“Some people hear, just by who I am, … the sermon about stepping into who God has called you to be, and understanding transformation even if it’s hard … I wasn’t really ready to do anything while I was going by the name of Miriam. I was sort of a lonely person, and I don’t think that’s a way to head into ministry. So I don’t think I, as Miriam, could have been a minister, or much of anything” (In Call Me Malcolm, quoted in Cornwall).

He completed transition in 2002, taking the name Malcolm, and graduated and was ordained by the 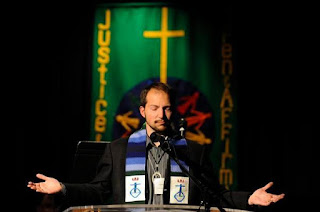 UCC in 2004. In 2005 he married a female friend who knew his gender history. That year the UCC at its General Synod voted 80% in support of equal marriage, the first major US church to do so.  In 2007 Malcolm and his wife welcomed twin girls into their family.

Malcolm served as an associate pastor in Minneapolis, and as the Open and Affirming Coordinator for the United Church of Christ Coalition for LGBT Concerns. In 2012 he became an adjunct professor at the Iliff School of Theology. In 2019 he returned to being a full-time pastor at a church in Maine.